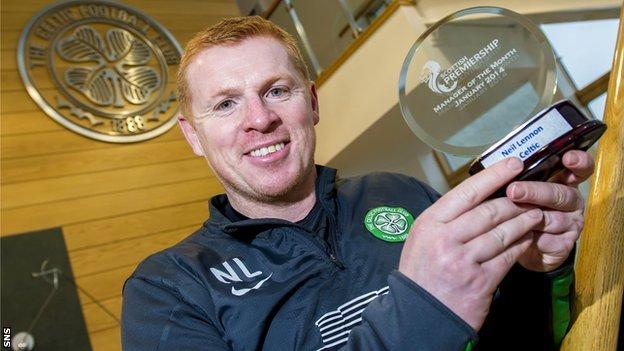 Neil Lennon has been named SPFL Premiership manager of the month for January.

His goalkeeper Fraser Forster kept as many clean sheets in that run.

"It shows the consistency the players have shown and that last week [loss to Aberdeen] came out of left field. The form we had shown in the previous two months had been red hot," said Lennon.

"All we want to do is get back to winning ways on Sunday and continue in the same vein of form that we have shown for 95% of the season," the Celtic boss added.

Celtic have won 21 of their 24 league matches and have drawn three. The manager says the incentive for his players is to remain unbeaten for the rest of the season.

Reflecting on Saturday's 2-1 Scottish Cup defeat by the Dons, Lennon said: "The FA Cup was important to us because we were the holders. I can't dwell on it, I can't let the players dwell on it.

"They've had a brilliant season, they've had the Champions League as well. Some players are right at the top of their game at the minute.

"They have entertained and they are breaking records.

"We want to finish the season in style rather than just let it peter out.

"The priorities were always Champions League and league and we are still on target for that. Any cup is a bonus."