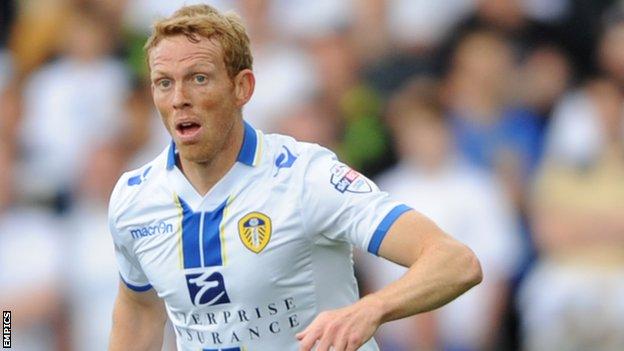 Leeds United midfielder Paul Green does not expect to play for the club again after joining Ipswich Town on loan.

The 30-year-old has played 10 times for United this season, but has not featured since October.

"I've not been involved much this year and that's probably a big factor in me not staying next year," he told BBC Radio Suffolk.

Green was born less than 20 miles south east of Leeds in Pontefract.

He started his career at fellow Yorkshire club Doncaster before a spell at Derby County.

He has four goals from 46 for United.

"It would be nice to get something sorted - if not here [at Ipswich] then somewhere else."

Green, who will be at Portman Road until the end of the season, is out of contract this summer after signing a two-year deal following his move from Derby County in 2012.

The Republic of Ireland midfielder was signed by Neil Warnock and made 30 appearances under the former Sheffield United boss, but has found opportunities hard to come by under current manager Brian McDermott this season.

"It's my home town and I loved it there. Neil Warnock brought me in but this year I've been out of favour," he said.

"I enjoyed it and it's a shame I couldn't stay. But it's nice to be down at Ipswich and helping them get into the play-offs.

"I've been down a week or so. It's a lovely place. The lads are brilliant."

And Green is also keen to remain on the international scene, having played in Martin O'Neill's first two games as Republic of Ireland manager in November.

"Internationals are a big thing for me. To be playing games and to get into the squad for March [a friendly against Serbia] would be great, but we'll see what happens when that comes around," he said.