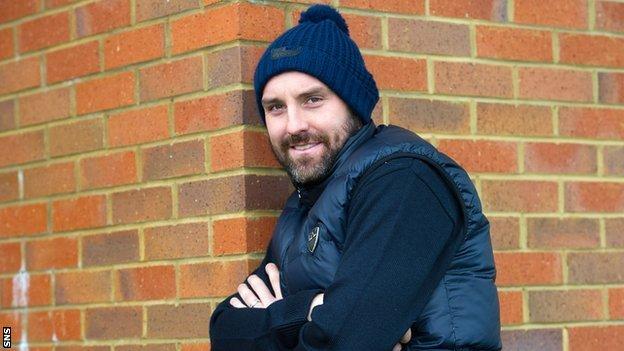 Kilmarnock's Kris Boyd insists he is in no hurry to make a decision on his future before this season ends.

The striker's contract at Rugby Park expires in the summer and Coventry City are the latest club to be linked with the Scotland international.

Boyd, 30, told BBC Scotland: "In the past I might have rushed into things. I don't need to now.

"I can take my time and see what happens. I love it here, it's brilliant. It's a great club."

And he added: "For me now it's a case of between now and the end of the season to score as many goals as I can and get Killie up the table."

Boyd's impressive performances and 15 goals this season for the Ayrshiremen have attracted attention from other clubs.

I'm not going to say I should be in it, because there are a lot of good strikers out there playing at a higher level than me

But, despite scouts assessing the rejuvenated striker, the January window closed with him still at Killie.

"I never said I was going to be leaving," he stressed.

"I always said if you're scoring goals and performing well there will be interest from other clubs - that's part and parcel of football.

"And if you've got that interest then you're doing your job properly."

Boyd is also determined to see the fans return to Rugby Park in good numbers and feels he and his team-mates can make that happen.

Some supporters have boycotted Kilmarnock home matches this season as a protest against the stewardship of chairman Michael Johnston.

And that, plus a poor start to the season, has affected attendances.

"We need to put pressure on ourselves to go out and perform in a way that's going to get people back through the door," said Boyd.

"That's down to us as a team and as individuals to perform on the pitch.

"At the beginning of the season we could understand why fans weren't coming because we weren't getting results.

"But we know how football works - if you're doing well they are going to come back.

"Dundee United's crowds are up again because they are doing well, they are exciting and are producing performances on the pitch.

"So that is the challenge for us between now and the end of the season."

Boyd's form was recognised by Scotland manager Gordon Strachan with a late call-up to the squad which travelled to Norway in November.

And the striker, who has scored seven goals in 18 appearances for his country, admits he would like to be involved again when the squad is named for the friendly with Poland on 5 March.

"I've obviously got one eye on it," he continued.

"I'm not going to say I should be in it, because there are a lot of good strikers out there playing at a higher level than me.

"But Gordon knows what I can do and he has a decision to make.

"It's up to me to keep performing the way I have been between now and the squad being named," said Boyd.