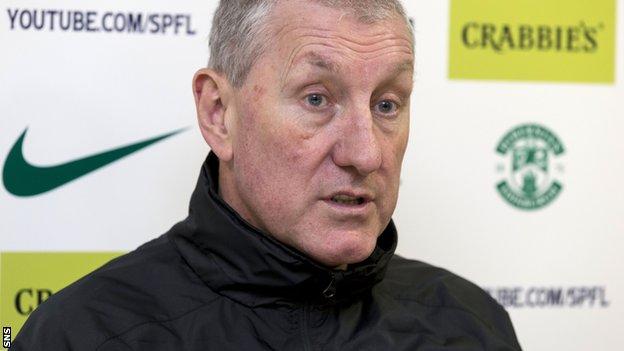 Terry Butcher has told his Hibs squad that some of them are playing for their futures at the club.

The Edinburgh outfit, seventh in the Premiership, aim to bounce back from the disappointment of their Scottish Cup exit against Raith Rovers.

"It doesn't matter if you've got a one-year deal or a five-year deal, you're always playing for your future," he told BBC Scotland.

"Every game is a job interview for a player; at Hibs or somewhere else."

If you can turn in a number of excellent performances between now and the end of the season then, certainly, it's going to turn my head

The Easter Road side have finished in the bottom half of the top flight in the last three campaigns and Butcher is seeking a strong finish to the season.

"You don't know if you're going to play in the next game but you're hopeful that if you put in a good performance that'll put you in the frame to start again the next week.

"It doesn't matter how long you've got left on your contract, it's about playing well in every game. My mind's not made up about any player, it's just a case of what team can be put together and how can we win.

"Every game is a job interview for a player; whether that be at Hibs or somewhere else, everybody's looking.

"If you can turn in a number of excellent performances between now and the end of the season then, certainly, it's going to turn my head.

"If players don't perform and don't contribute then it's not looking good for them.

"We're in it together. The main thing we had in the meeting the other day with the players was that everybody can do more. And that includes myself and Maurice [Malpas, his assistant]."

Butcher has also targeted a place in the top six in his first campaign at Easter Road.