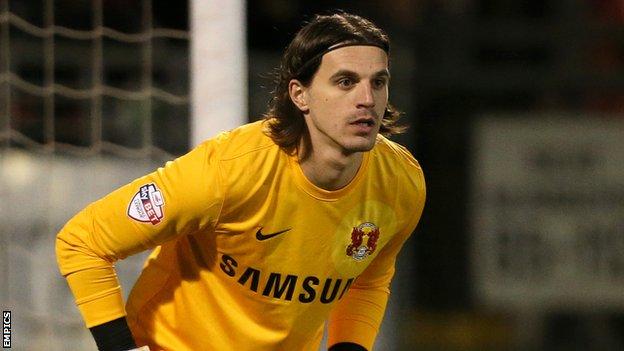 However the Switzerland international was recalled by the Premier League club after Tigers number one Allan McGregor received a three-match ban.

Jakupovic has now returned to the Matchroom Stadium and will remain with the O's until mid-April.

"We've watched and monitored the situation and I am good friends with [Hull boss] Steve Bruce as well so that has helped," Orient manager Russell Slade told BBC London 94.9.

"We have been able to keep a dialogue going with Hull City."

The most worrying position is filling that number one shirt and it has been a major concern. It has taken up a lot of my time in terms of dealing with that

The return of Bosnia-born Jakupovic, who was signed after Jamie Jones suffered a long-term back injury, should solve a goalkeeping crisis for Slade.

After Jakupovic returned to Hull on 29 January, Slade brought in Ben Alnwick from Charlton on transfer deadline day.

Alnwick played in the 2-1 defeat at Rotherham on 1 February but was subsequently given a leave of absence on medical grounds.

The east London club then made a loan move for Bournemouth's Shwan Jalal, who played in the defeats at home by Peterborough and Bristol City.

"We have had a problem with the goalkeeping situation which I don't think has helped our cause too much," Slade added.

"With losing Eldin, when we thought we had found a replacement at least in the medium term for Jamie Jones, we had to go back into the market fairly rapidly.

"We got Ben Alnwick which we thought would be a really sound signing for us but unfortunately it has not turned out that way.

"In an emergency - within 48 hours - we had to get another keeper in with first-team experience because that was important to us. He [Jalal] has had a difficult time, particularly in the second of the two games and has picked up a bit of a groin strain.

"The most worrying position is filling that number one shirt and it has been a major concern. It has taken up a lot of my time in terms of dealing with that."