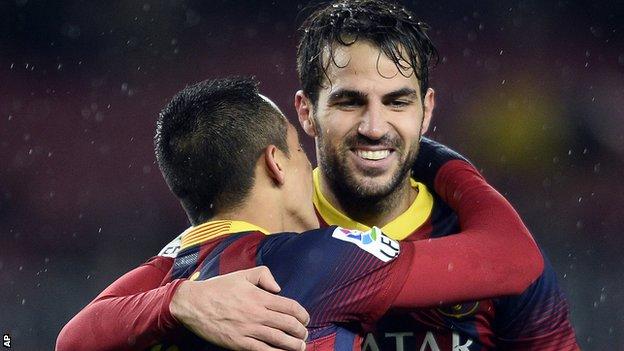 The 26-year-old was the subject of two close-season bids from Old Trafford but chose to stay at the Nou Camp.

"I do follow the Premier League a lot and it's always flattering when a club like Manchester United talks very well about you and you can see they want you," the Spaniard told Football Focus.

"But I'm going through an amazing moment [at Barcelona] now."

The former Arsenal playmaker, who has won two European Championships and one World Cup with Spain, has been a regular this season for Barcelona, who currently lead La Liga on goal difference.

"I'm playing every week and I feel very important to the team," he said. "I'm very happy right now.

"This season I have felt more like myself, with more freedom and more secure with the way I like to play. It's not easy when you know you have to convince many fans how good you are and how good you can be for the team.

"The manager [Gerardo Martino] has trusted me and given me what I needed. I'm probably going through my best spell here."

Fabregas said he regularly watched the Premier League on television.

And he claims he has seen enough of some of England's young players to suggest Roy Hodgson's national side could have a bright future.

"I have seen youngsters like Jack Wilshere, Tom Cleverley and Danny Welbeck play and they have got talent," he said.

"That's the thing England have been missing over the years - talent. They have got a great group of boys with amazing talent and they have to take advantage of that."

Manchester United players Cleverley and Welbeck are now linking up with Fabregas's compatriot Juan Mata at Old Trafford, after the Spain international's move from Chelsea in a £37.1m deal in January.

That transfer surprised Fabregas, who was said he was shocked Blues boss Jose Mourinho let the playmaker leave Stamford Bridge.

"I was surprised to see Juan move there because I think he has been Chelsea's best player over the last two years," added Fabregas.

"He's produced some amazing performances as they won the Champions League, Europa League and FA Cup and he scored in the final of the European Championship with Spain."