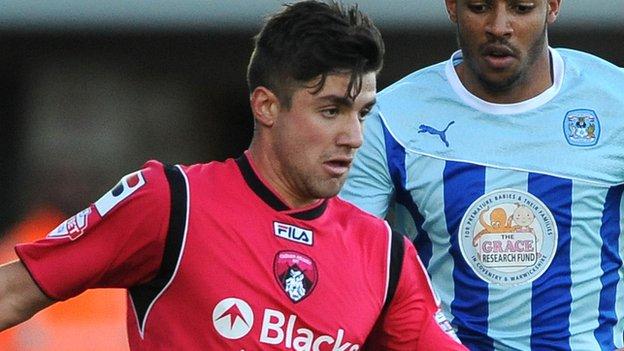 Coventry City have made a double loan swoop for two teenagers, bringing in QPR winger Michael Petrasso on an initial 28-day deal, along with Arsenal striker Chuba Akpom on a youth loan.

City have responded to injuries to two of their recent signings - Nathan Delfouneso and Mark Marshall - and Rory Donnelly's rapid return to Swansea.

The two 18-year-olds are in the squad to face Bradford City on Saturday.

Akpom moves until the end of the season but Petrasso joins only for a month.

Canadian Petrasso, who was on the books of Major League Soccer side Toronto FC, arrived at Loftus Road last summer, after which he was loaned out to Oldham Athletic.

He has already played at Sixfields this season, having featured in a 1-1 draw with Coventry over Christmas, while he was on his two-month loan with the Latics.

"We were impressed by his work-rate and speed.

"He's a wide player who give us something different and will really excite people.

"We've been watching for a while so we are delighted to get him in the building."

Akpom goes back on loan again, shortly after returning from a month with Coventry's League One rivals Brentford.

"But he's a good size. A good physical specimen with good mobility who will be a really good foil for Nathan Delfouneso."