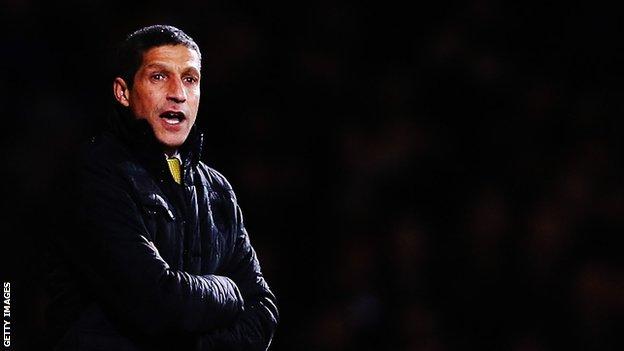 The Canaries have won one of their last 11 Premier League games and are a point above the relegation zone.

"We are too close for comfort," McNally told BBC Radio Norfolk.

"Chris has been told in no uncertain terms 'get us out of that position and keep us out'. But equally, we're three points off 10th."

There have been calls from a section of Norwich fans for Hughton to be sacked, with their side having been embroiled in a relegation battle for most of the season.

The midweek defeat at relegation rivals West Ham worsened matters for the Canaries, who are in their third consecutive Premier League season.

McNally added: "As far as giving any certainty for Chris, or anyone else - it's a results business. Whether that's Chris Hughton as manager or me as chief executive or anybody else, we're paid to do our jobs.

"As long as we achieve what is required of us, then we'll stay in work. It would be wrong at any level, delinquent almost, to give any guarantees.

"All I would assure Norwich supporters is that we are watching it very carefully.

"The whole board is aware of the strength of feeling from the support."

McNally, who recruited former Newcastle boss Hughton from Birmingham City in 2012 following Paul Lambert's exit, has also said supporters' expectations may be too high after the club's record transfer spending in pre-season.

"I know, having invested in the summer, the supporters expect us to be in a higher position, which is a natural conclusion considering this is our third season in the Premier League," he said.

"Last season, we finished 11th. We had the 20th biggest payroll.

"I know Chris is working hard to do what we need to stay in the league and move up the table.

"He's 100% positive he will do that. So he has the support of the club to go on and ensure we get the points to achieve those objectives."