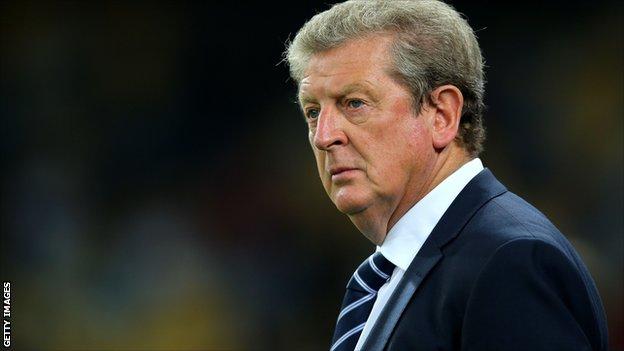 England manager Roy Hodgson has a nasty side to him, according to his assistant Ray Lewington.

Members of the national team have often spoken about how much they enjoy working under the 66-year-old coach.

He can be difficult to work for sometimes because he demands that everyone does their best. He has high standards

However, if they fall out of line, Lewington says Hodgson's players are never spared a dressing down.

"What you see is what you get with Roy, but people will be surprised to hear he has a nasty side to him too," Lewington told Crystal Palace's website.

Lewington, who will help Hodgson at this summer's World Cup in Brazil, has developed a close bond with the England manager during their five years together with Fulham and the national side.

And he has dismissed any suggestion that Hodgson, who was appointed in May 2012, is afraid to lose his temper when he feels it is necessary.

"You ask some of the members of the Fulham squad. They know about it," he said.

"It wasn't a forced anger. When he was angry he was genuinely angry and the players knew about it.

"He can be difficult to work for sometimes because he demands that everyone does their best. He has high standards. He is a very articulate, charming man. He does the job as he sees it and everyone has to get to that degree of excellence.

"If you don't, he tells you. He is what you see but he has also got that other side you don't see."