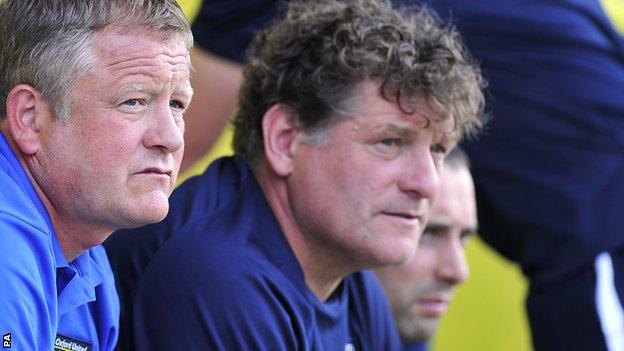 Oxford United caretaker manager Mickey Lewis has played down suggestions that a good result against Mansfield will see him offered the manager's job.

"I'm enjoying it but it is an ongoing thing, no-one is talking about what is going to happen in the future," Lewis, 48, told BBC Radio Oxford.

"If we get a win on Saturday then I'll just be worried about Newport."

The U's are unbeaten in their last seven games, four of which since Lewis has been at the helm, prompting talk he may be set to be offered the job on a permanent basis.

"People can talk about it but we just want to keep playing," added former Oxford midfielder Lewis, who was also U's caretaker back in 1999-2000.

"We all have the same one goal - everyone wants to get promoted.

"For anybody, whatever situation you're in whether you're a coach, manager or player, your situation is much improved if you have a promotion on your CV."