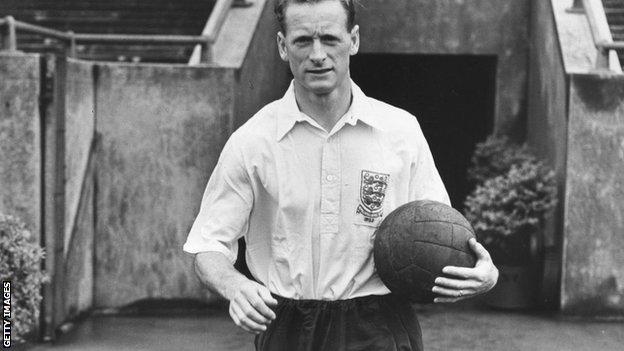 There is a photograph tucked away among the fading brown boxes in a half-forgotten corner of the loft at my parents' house in Preston.

On it, my sister and her classmates are smiling at the camera, holding in their hands a certificate that they have just been awarded. To one side of the photo is Sir Tom Finney, the man who has just handed them out.

It is a long time ago and I doubt if my sister, who was around 10 at the time, would have known who Finney was - but that would be to miss the point.

Just about everyone in Preston has their own story about Finney, who has died at the age of 91, or came into contact with him at some point or another.

He is inextricably linked with the city, whose football team he represented with such distinction between 1946 and his retirement in 1960. He was a one-club man, although that would not have been the case if a financially lucrative move to Italian side Palermo had not been swiftly and decisively extinguished by Preston North End's chairman in 1952.

Finney was the footballer of the year in 1953-54 and again in 1956-57. He won 76 England caps and found the net 30 times, a tally that places him joint sixth in the list of the country's highest goalscorers.

"He was a ghost of a player but very strong," said former Preston team-mate Bill Shankly. "He could have played all day in his overcoat."

He was on the losing side in the 1954 FA Cup final and retired in 1960 after eventually succumbing to a persistent groin injury. His final match was against Luton Town at Deepdale and the supporters sang Auld Lang Syne as he walked onto the pitch. He scored 187 goals in 433 league appearances and, more than 50 years later, the hole he left has not been filled.

His beloved North End were relegated from the top flight the season after he hung up his boots and have never returned. I imagine Preston's predicament would have been a source of great frustration for an exceptionally proud man, the club that Finney served as president for many years dropping into football's third tier in 2011 after more than a decade of Championship football.

My father was a huge, huge fan of Finney's. He will tell you at length about the grace and tenacity of Finney in possession; that the opposition tried to kick him off the ball for 90 minutes but could not upset the rhythm and balance of a man of slight build who refused to respond to provocation.

The 1950s was a golden age of football and Deepdale was packed to the rafters, with crowds regularly in excess of 30,000. My dad and his siblings reckon they would sit on the cinder track that surrounded the pitch, only yards away from Finney as he glided down the wing.

Finney walked from his modest home to Deepdale for home games, chatting with well-wishing supporters along the way. He worked for the family business on Saturday mornings, hence his nickname of 'the Preston Plumber'. It was easy for North End supporters to connect with him because he was one of them.

They were on different sides of the whitewash on a Saturday afternoon but, during the week, Finney and his fans had many of the same concerns and problems. Unlike many modern highly-paid footballers, his salary did not catapult him on to a different level from those he grew up with.

Finney was never booked or sent off in his career and it is his dignity and sportsmanship that perhaps stands out above all his other qualities. Finney has always been compared to fellow winger Sir Stanley Matthews, who spent the vast majority of his career at Stoke City and Blackpool.

It is a question without a definitive answer but whereas Matthews was perhaps the great entertainer, a footballer of immense flair, Finney was regarded as a selfless team man, willing to play anywhere along the front five.

A tribute to Sir Tom Finney

"Those of us who only heard stories of Sir Tom Finney's career with his beloved Preston North End and England were left in no doubt as to the measure of his greatness.

"No-one has ever surpassed Finney in the affections of Preston fans, making 433 appearances and scoring 187 goals in a one-club career, remaining the towering and most significant figure in this proud club's history.

"Finney, 'the Preston Plumber', was usually spoken about as a winger but those who set eyes on him spoke of so much more to his game and a talent that transcended partisanship, meaning he was loved and revered far beyond the place where he played his club football.

"A slight figure with wonderful balance and limitless courage, the words of his contemporaries painted a vivid picture of one of the finest players to grace the game, a forward admired by team-mates and opponents, and opposing supporters, alike for his humility and modesty as well as his ability.

"Those of us who did not see him would have loved to have seen him. Those who did see him were warmed by those memories on a sad day for football - and a particularly sad day for the city of Preston, where his contribution stretched much wider than even his wonderful playing career."

I met him several times and each experience only served to underline everything I had been told about him. I called him once in the evening to ask for his reaction after it emerged that manager David Moyes had left Preston for Everton.

He was looking after his wife, Lady Elsie, who died in 2004 after a long battle with Alzheimer's, but said he would happily answer my questions if I called back an hour later. He always gave the impression that nothing was too much trouble and that he would go out of his way to accommodate people. Even towards the end of his life, he made every effort to answer the fan mail that still arrived for him at Deepdale.

There were disappointments in his career. He played at three World Cup finals and was a member of the England team humiliated by the United States at the 1950 tournament. He was carrying an injury in the 1954 FA Cup final and, by his own admission, had a poor match.

After retirement, he worked in journalism and continued the family business. He was appointed an OBE in 1961 and later became a local magistrate and chairman of his local health authority.

He received a knighthood in 1998, although I am told that he always felt uncomfortable when people addressed him as Sir.

There are pubs named after him in his home city, the road leading up to Deepdale bears his name and there is a statue of Finney outside the stadium. It is a recreation of the Splash, a famous photograph that captured him sliding across a waterlogged surface at Stamford Bridge to control the football.

Finney is, and will always remain, indivisible with the town of Preston, which was granted city status in 2002. As with Billy Wright at Wolves and Nat Lofthouse at Bolton, he was a one-club man, but it goes far deeper than that.

Preston has lost its favourite son, a man who gave Prestonians pride in the place from which they come. It was as though a little of the esteem and respect in which Finney was held rubbed off on all of them.

My dad always insisted that he knew him. Everyone of his generation did and so I took his words lightly. One day I was walking through the centre of town with my old man when I noticed Finney walking towards us. He looked up as our paths crossed and, with what I am sure to this day was a hint of recognition, looked my dad square in the face and wished him good morning.

Sir Tom, you will be missed.