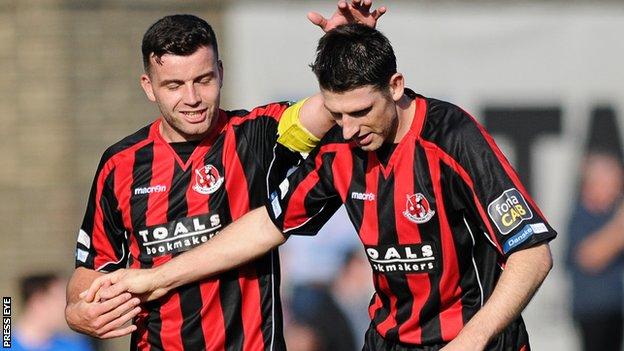 The trio return after bans while Paul Heatley and Chris Morrow are doubts and they will have late fitness tests.

Meanwhile, there is a morning pitch inspection for Linfield's game against Ballinamallard at Windsor Park.

Blues midfielders Robert Garrett (suspension) and Aaron Burns (injury) are out while Mallards defender Craig Hill is back from a ban.

Linfield will be aiming to bounce back from their Irish Cup exit at the hands of Ballymena United last weekend.

The north Belfast derby between Premiership leaders Cliftonville and Crusaders is the feature game on Saturday Sportsound, hosted by Michael McNamee on Radio Ulster from 14:00 GMT.

Commentator Joel Taggart will be joined by Chris Morgan and Gerry Flynn for the Solitude encounter.

Grant Cameron and Lindsay McKeown are on commentary for Linfield v Ballinamallard and there will be reports from the other four league matches.

"It means we are now focused totally on trying to win the Irish League," Blues manager David Jeffrey told the club website.

"Last season we were nowhere in the title race but this year, the challenge is there for the players, the staff, the management and of course the supporters to give their all over the remaining 11 league games to try and win the league title.

"Certainly, from talking to the players and staff at training, we're more determined than ever to try and secure the league title."

Cliftonville are a point ahead of Linfield and seven clear of the Crues in third place.

"They've been good games between us this season and it is another big match, one I am looking forward to," said Crusaders boss Stephen Baxter.

"It is always a great atmosphere and everything is set up for a good game of football."

Ballymena are boosted by the return of defender Johnny Taylor from suspension as they prepare to host a Coleraine side missing the banned Michael Hegarty.

There is another derby encounter at Mourneview Park, with Glenavon missing the injured Marc Brown for the visit of Portadown.

Glentoran full-back Jason Hill is an injury doubt for the Clandeboye Park meeting with Ards, who are 11 points adrift at the bottom.

Dungannon Swifts will once again share their Stangmore Park ground with Warrenpoint Town for the Co Down team's next four 'home' games.

The two sides meet on Saturday, with Warrenpoint as official hosts, and Town are without the suspended Darren King.

Swifts striker Jamie Douglas is ruled out with a hamstring injury while Andrew Burns, Ricky Copeland and Matt Hazley are banned.