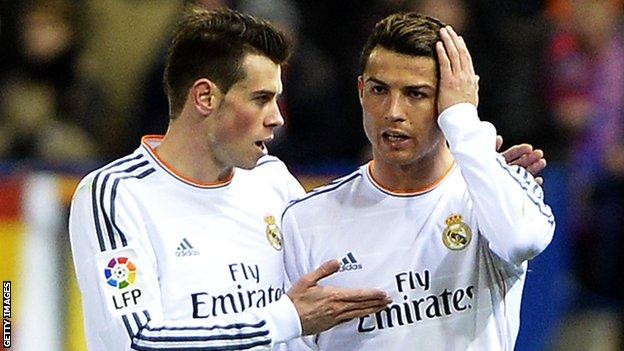 Atletico Madrid have been fined £492 after Real Madrid forward Cristiano Ronaldo was struck on the head with a cigarette lighter.

Ronaldo was leaving the pitch at half-time during Tuesday's Copa del Rey semi-final at Atletico's Vicente Calderon when he was hit by the object.

It was thrown from the crowd after the 29-year-old had scored two penalties to help Real advance to the final.

The Spanish Football Federation (RFEF) said it was an "isolated" incident.

They added that the fine would have been halved had Atletico been able to identify the person responsible for throwing the lighter.

Ronaldo, who had been booked shortly before half-time, was not seriously injured and was able to play on, although he was eventually substituted 15 minutes from the end of the game.

Real Madrid won 5-0 on aggregate and will face Barcelona in the Copa del Rey final.