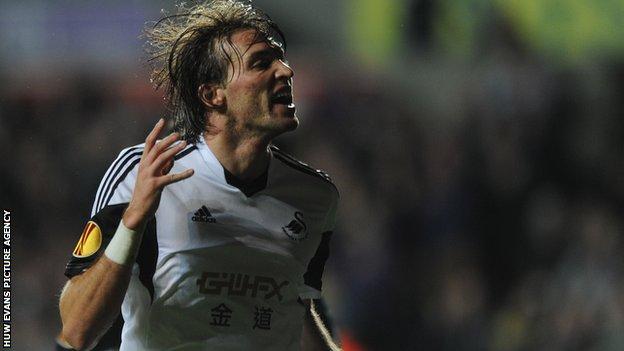 Swansea City forward Michu is in contention to return to the side to play at Everton in the FA Cup fifth round on Sunday.

The 27-year-old Spaniard has been sidelined since having ankle surgery at the end of December.

Swansea head coach Garry Monk says Michu has been training and could feature against the Toffees.

"We'll look at him and see how he feels and if it's a possibility for the weekend," said Monk.

"If he feels right, maybe."

He has not featured for the club since Swansea's 1-1 draw at Norwich City on 14 December.

The Swans have struggled without him in the Premier League, winning just twice in 10 matches.

Although 10th in the table they sit just four points above the relegation zone.

Their form in the FA Cup so far has been a different story with victories at Manchester United and Birmingham City.

On Sunday, they will be aiming to reach the quarter finals of the competition for the first time since 1964, when they beat Bill Shankly's Liverpool at Anfield.

Standing in their way are fifth placed Everton, managed by their former boss Roberto Martinez.

Monk played alongside Martinez at Swansea after joining from Southampton in 2004 and became Martinez's captain when the Spaniard returned as manager in 2007.

Martinez went on to manage Wigan who he led to win the FA Cup last season before joining Everton.

Monk says he has a close relationship with the Toffees boss and has been given advice from him since taking over from Michael Laudrup at the Liberty Stadium.

"That relationship will always be there no matter what," said Monk.

"I have learnt from him and the experiences he had here.

The Swans last reached the quarter finals of the FA Cup in 1964, beating Bill Shankly's Liverpool 2-1 at Anfield. They lost the semi-final 2-1 at Villa Park to Preston North End.

"It's like what I am doing now, taking charge after being a player and changing your role.

"He is a great guy and he is at the top of his game. I've experienced his management so I know how good he is.

Monk, has led Swansea to a win against Cardiff and a draw at Stoke in his first two games in charge.

Although he says Premier League survival is the Swans' priority, he wants to do well in the cup as well.

"We had a good experience in a cup competition last year, and we'll be trying to win the game," said Monk.

"If we can come through this game and the rest of the month with some good performances and good results, then I think it will stand us in good stead for the rest of the season."