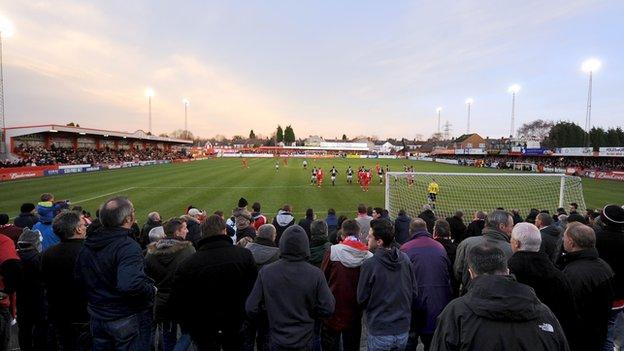 Tamworth have signed striker Jessy Reindorf following the cancellation of his contract by League Two side Bury.

The 22-year-old Rwanda international is the Lambs' second new signing this week, following the arrival of England Under-19 defender Kieran Fenton on a youth loan from Nottingham Forest.

Reindorf goes straight into the Lambs squad for Saturday's trip to Barnet.

Having played in Italy, France and Belgium, Reindorf came to English football with Bury in August.

He scored on his Shakers debut, coming off the bench to blast home a stunning 35-yard strike in the final minute of Bury's 6-3 Capital One Cup defeat at Norwich. in August.

He then also came on as substitute to score on his league debut the following week, in a 4-1 win at home to Cheltenham.

After making two more late substitute appearances, he got his first start in September - but he was substituted before the hour mark and has not started a game since.

Since having his two-year contract cancelled by Bury on 16 January, Reindorf has been on trial with Scottish Championship club Falkirk.