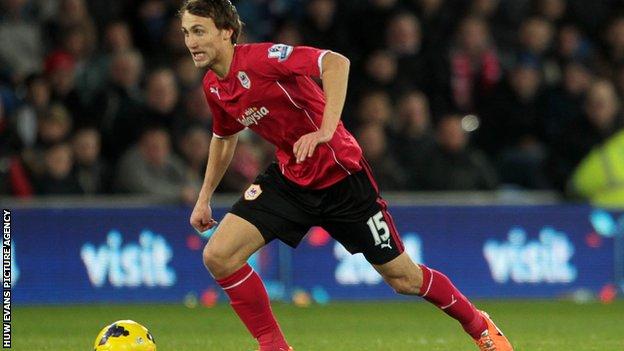 The Bluebirds who are second from bottom in the Premier League, host holders Wigan on Saturday in the fifth round.

Eirkrem, who joined Cardiff from Dutch club Heerenveen in January, says City are confident of beating the Championship side.

"We think we have a good chance," said Eikrem.

The 23-year-old former Manchester United apprentice played under Cardiff boss Ole Gunnar Solskjaer in the reserves and at Norwegian side Molde.

Cardiff's path to the 5th round

He joined Heerenveen in the summer of 2013, making 13 appearances in the Dutch top flight, before signing for Cardiff.

Eikrem has so far made three appearances for the Bluebirds in the Premier League off the bench.

His only start came in the 1-0 win at Bolton in the last round of the FA Cup.

He says he's settling into life with Solskjaer's side "very well" and hopes to play against the Latics on Saturday.

Cardiff reached the final in 2008, losing 1-0 to Portsmouth and Eikrem thinks they can go all the way again.

"Every player dreams of playing at Wembley and that would be unbelievable," says Eikrem.

"It's going to be a tough game. Wigan are a good team."