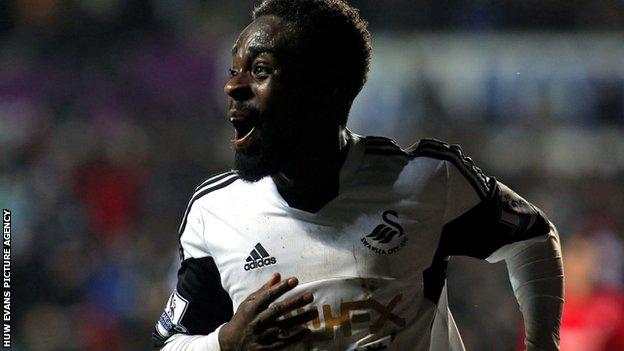 Dyer, 26, scored two goals and was man of the match when the Swans beat League Two side Bradford 5-0 to win last year's Capital One League Cup.

The winger hopes his side can draw on that experience when they face Everton in the FA Cup fifth round on Sunday.

"We haven't had a great run in the FA Cup so it would be great to go all the way to the final," said Dyer.

Swansea have so far beaten Manchester United and Birmingham City in this year's competition.

If they have not reached the quarter-finals since 1964 and have never beaten the Toffees, who are managed by former Swans boss Roberto Martinez.

Martinez signed Dyer on a permanent deal for £400,000 from Southampton in June 2009 following a successful loan spell at the club.

The Spaniard went on to manage Wigan who he led to win the FA Cup last season before joining Everton.

"I always knew he would be a great manager," said Dyer.

"He has had great success and he understands players and how to put a team together.

"But we'll need to focus on Sunday because it is going to be hard game and Everton are doing well at the moment.

"However, we're on the front foot and we want that to continue.

"We know what rewards can come through doing well in a cup competition.

"We want to go as far as possible. We're all in it together and we'll be pushing hard in every game we play."

Swansea's new head coach Garry Monk has led Swansea to a win against Cardiff and a draw at Stoke in his first two games since taking over from sacked Michael Laudrup.

Dyer says Monk has had a positive influence on the squad.

"Teams can't live with the pace we have in the team and that's what he [Monk] has brought back in," said Dyer.

"His knowledge of the game is incredible.

"The work he has been doing is great and as long as we continue to work hard for him then anything is possible."