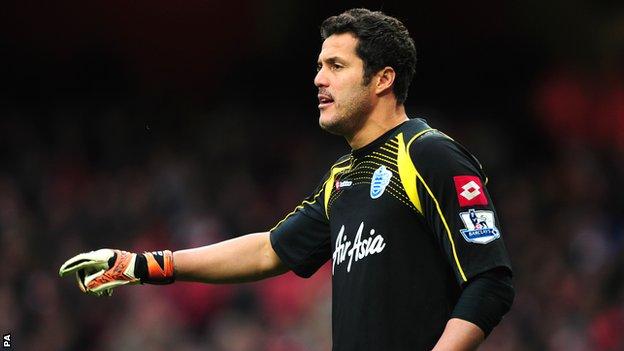 Brazil goalkeeper Julio Cesar has left QPR to join MLS side Toronto FC on loan for the rest of the season.

Cesar, 34, joined Rangers from Inter in 2012 but has made just one appearance for Harry Redknapp's side since their relegation from the Premier League.

"Adding a player of Cesar's experience and ability strengthens our club in the short and long term," said Toronto general manager Tim Bezbatchenko.

Cesar will be joined at Toronto by Tottenham striker Jermain Defoe.

Defoe, 31, will leave Spurs for Canada in a fortnight's time after agreeing a four-year deal, worth £68,000 per week, potentially rising to £90,000. Toronto play their first game of the new MLS season on Saturday 15 March.

Bezbatchenko said: "We are committed to creating a culture of winning at Toronto FC, and there are few people in the world of soccer with a proven track record of consistently getting the results that Julio has.

"We are very excited to bring him to Toronto FC."

Cesar was this week named in the Brazil squad to face South Africa next month and hopes to be first choice at this summer's World Cup finals. He will join the Canadian club officially when the MLS transfer window opens next Tuesday.