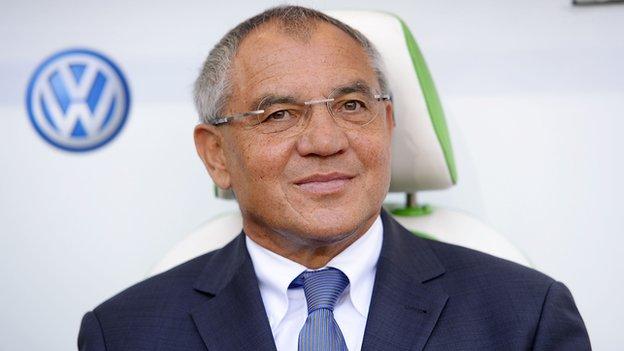 The Dutchman, who succeeded the sacked Martin Jol in December, told BBC Sport that he had been fired but he remains under contract at Fulham.

Meulensteen, who won four of 17 games in charge, told BBC Sport: "They have hit the panic button on emotion and fear - but hey ho, that's football."

He was not mentioned in a club statement announcing Magath's arrival.

Magath, 60, has signed an 18-month contract at Fulham, who are bottom of the Premier League. He has won the Bundesliga three times as a manager, most recently with Wolfsburg in 2009, and is the first German to manage in the Premier League.

In a statement on his Facebook page, he said: "This amazing club, steeped in tradition, and its owner Shahid Khan have totally convinced me and given me the managerial responsibility.

"I would like to thank the club and the owner for this faith."

He guided Fulham to a 2-2 draw at Old Trafford on Sunday but the Cottagers were beaten by a last-minute penalty as they lost 3-2 to Liverpool in midweek.

Speaking to BBC Radio 5 live, Meulensteen said: "I knew the owners were freaking out a little bit that there was the possibility of the club going down.

"The way forward that we have discussed with the club was about longevity and in this case it is clearly an act of fear.

"I have not had a lot of time and people who came to the Manchester United and Liverpool games could see what I was trying to put in place.

"I couldn't care less what they put in the statement, to be honest."

German Magath has been out of work since leaving Wolfsburg in 2012 but won the double twice with Bayern, adding a third Bundesliga title with Wolfsburg in 2009.

Khan added: "Felix is an accomplished manager with multiple honours in the Bundesliga and a hunger to replicate his success with Fulham in the Premier League.

"I'm especially impressed with the reputation Felix has for coming into clubs at difficult times, often late in the season, and lifting them to their potential and beyond.

"Felix knows that is precisely the task awaiting him at Fulham, and he made it abundantly clear that he wants and is ready for the opportunity.

"Our club has shown promise in recent matches, but the fact is we have not won a league match since 1 January. Given our form, we can no longer merely hope that our fortunes will finally turn."

Magath is likely to meet the backroom staff, including Alan Curbishley and Ray Wilkins, to discuss a way forward on Sunday.

Fulham, whose next game is at 17th-placed West Brom on Saturday 22 February, said that an announcement on their backroom staff will be made in the near future.