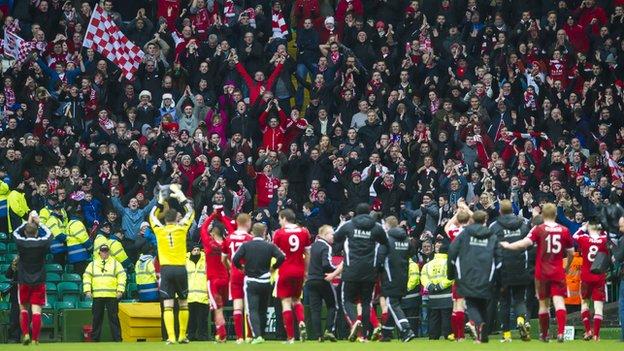 Aberdeen fans will be allocated more than 30,000 tickets for next month's Scottish League Cup final.

The match against Inverness Caledonian Thistle will take place at Celtic Park on 16 March.

Every season ticket holder at Pittodrie will be able to purchase three tickets for the club's first final since 2000.

The Dons last won the League Cup in 1995 and details of when the tickets will go on sale will be announced early next week.

Aberdeen are also in the last eight of the Scottish Cup, having disposed of holders Celtic last weekend.

Recent arrival Shaleum Logan played in the 2-1 success in Glasgow after making his debut in the 4-0 League Cup semi-final win over St Johnstone.

"It's been a good start," enthused the full-back on loan from Brentford. "Two games, two wins, a cup final reached and knocking Celtic out of the cup is a very good way to start my Aberdeen career.

"I didn't know what to expect really. I'd say I've been surprised with what I've seen so far - and it's been a good surprise to be honest. Playing with the boys in training, I can see why they got the results we have.

"With being here two weeks, it's not really kicked in, but I spoke to a few fans and they have left me messages, and what it means to them is beyond words.

"It's been such a long time since they have won anything it would mean the world to them just to win one cup this season."