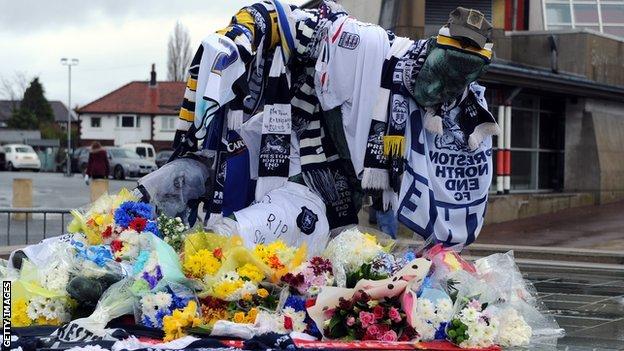 Tributes have been paid to former Preston North End and England winger Tom Finney, following his death at the age of 91.

Finney, who earned 76 caps for his country, is considered one of the greatest players England ever produced.

Docherty, who played with Finney, said: "He was the best player I've ever seen, alongside Lionel Messi."

"I watch a lot of Barcelona and when I watch Messi, I close my eyes and can see Tom. I'm serious when I say that Messi is the Tom Finney of today.

"Just like Finney, Messi is always getting fouled, but doesn't complain and just gets up and gets on with the game."

Finney played in three World Cups between 1950 and 1958, and is joint sixth on England's all-time scoring list with 30 goals, alongside Nat Lofthouse and Alan Shearer.

"I was lucky enough to have met him when I was on loan at Preston and he was not just an England great but a true gentleman," said former England captain David Beckham.

Away from the international spotlight, Finney's humble nature and reputation as one-club man endeared him to supporters everywhere.

Preston born, he spent his entire 14-year career with his home-town club and wore their famous white strip over 400 times.

"I remember taking the FA team out to the Far East. We were out in Hong Kong and somebody asked me where I lived. I said Blackpool and they asked how do you get to Blackpool? I said, you get a train and change at Preston. As soon as I said Preston, he said 'ah, Tom Finney'.

"When he finished playing, he did some reporting for a Sunday newspaper and he used to cover matches. I was playing for England at Cardiff against Wales and I got injured.

"I remember [former England manager] Walter Winterbottom asking me, 'how are you going to get home?' I was hobbling and, just at that moment, Tom knocked on the door of the dressing room, came in and asked me if I'd like him to drop me off.

"It hit me then. He didn't have to do that but he'd been a player and I'd played against him. No more than that."

"Preston has lost its favourite son, a man who gave Prestonians pride in the place they come from. It was as though a little of the esteem and respect in which Finney was held rubbed off on all of them.

"My dad always insisted that he knew him. Everyone of his generation did and so I took his words lightly. One day I was walking through the centre of town with my old man when I noticed Finney walking towards us. He looked up as our paths crossed and, with what I am sure to this day was a hint of recognition, looked my dad square in the face and wished him good morning.

"Sir Tom, you will be missed."

Finney scored 187 league goals for North End and was comfortable occupying any position across the forward line.

Although team silverware eluded him as he finished as a league runner-up in 1953 and 1958, as well as a losing FA Cup finalist in 1954, he was twice named Football Writers' Player of the Year.

"If Tom was injured and couldn't play, Preston would delay naming the team until after 2pm on a Saturday because the gates would halve if he wasn't on the teamsheet," added Docherty, who himself played over 300 times for the club.

"If Gareth Bale is worth £100m, then Sir Tom would be worth far in excess of that in today's market. In fact, there is not enough money in football to buy him."

To mark his passing, Preston's players wore black armbands and shirts with the name 'Finney' on the back - as well as their respective squad numbers - for their home draw with Leyton Orient on Saturday.

"In my time as Preston manager, he used to come in on a Friday morning and he would sit there and spend the whole morning signing autographs and books," said Craig Brown, who managed the club between 2002 and 2004.

"I know he cared for his late wife Elsie when she was ill and he diligently wouldn't bring in help - he wanted to do it all himself. This was a man of the utmost calibre and dignity."

Howard Kendall, who would later manage Everton, joined Preston as a schoolboy shortly after Finney's retirement in 1960 and recalls guidance offered to him by the club legend.

"He was so important to the Preston team that he played despite carrying injuries," said Kendall, who in 1964 became the youngest player to play in a Wembley FA Cup final at the age of 17.

"One very important piece of advice he gave me was to never to do the same. He said 'it is not the number of games you play in a season that counts, it is the number of seasons you play'.

"Bill Shankly once said that when it came to comparing Sir Tom with Sir Stanley Matthews, he would choose Sir Tom. When 'Shanks' said that, you had to listen."

Finney was knighted in 1998 and, according to Armfield, continued to love the game.

Sir Bobby Charlton, England's record goalscorer, describes Finney's contribution to English football as "immeasurable", but many former players reflect on his demeanour off the pitch as a defining characteristic.

"He came from a time of gentleman footballers where they were always properly dressed, wore a jacket and tie and acted accordingly," he said.

"They would go to the games with the fans, and we'll never see the like of that again.

"I've always had the highest possible respect and esteem for Tom Finney. It was like being in the company of greatness."