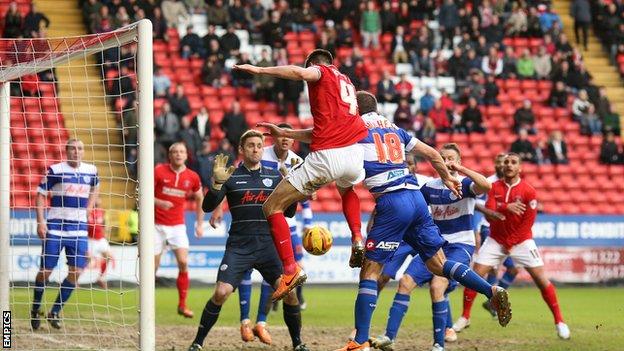 QPR's automatic promotion hopes took another blow as they were beaten by relegation battlers Charlton.

Johnnie Jackson headed in a stoppage-time winner from a tight angle at the far post to secure an Addicks victory.

Earlier on, Ravel Morrison - making his QPR debut after a loan move from West Ham - wasted his side's best chance when he shot wide.

Modibo Maiga also wasted a promising opening for the visitors before Jackson punished those misses with his goal.

The winner secured Charlton's first league win since Boxing Day, while QPR have have now lost three games in a row and are seven points off the top two with a game in hand.

Although QPR played the more intricate and neat football in the early stages, it was Charlton who could have gone ahead after 12 minutes.

QPR defender Nedum Onuoha went over in the box under a Michael Morrison challenge, but failed to win a penalty.

The visitors passed up another gilt-edged chance when substitute Maiga was gifted the ball by the Yohann Thuram-Ulien.

However, after going around the Charlton goalkeeper, the Rangers substitute lost control and the ball went out of play.

Those misses were compounded after Jackson's last-gasp goal left Charlton a point and a place from safety, with three games on hand over the four teams above them.

"This is the benchmark for what is to come over the next 17 games, I will make sure of that.

"One or two things went in our favour, which is about time because we have had many, many things go against us for some while now.

"People look for the captain to lead the team and with John it is his goals. It was apt he scored the goal.

"If you start looking at the table mathematically then we don't get beat at Charlton.

"All we can do now is look at Leeds United and look to get back on track. Get back to where we were earlier in season.

"As soon as we start looking at bigger picture and promotion then we could be in trouble. We need to focus on next game and getting a point."