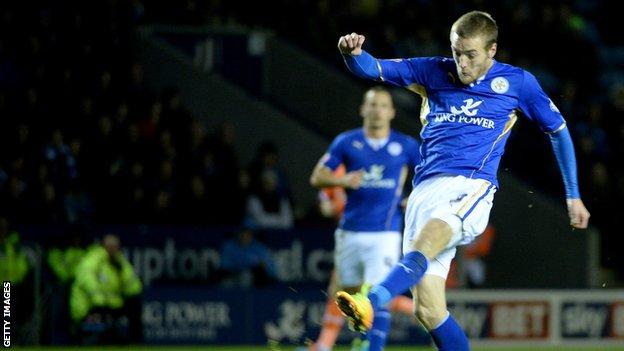 Jamie Vardy opened the scoring after taking advantage of a poor back-pass from Jay Tabb.

The victory keeps Nigel Pearson's team eights points clear of Burnley at the top of the table.

Ipswich, who have now gone three league games without a win, never looked capable of getting anything from their trip to the King Power Stadium. Defeat leaves Mick McCarthy's men 10th, five points off the final play-off place.

The Foxes totally dominated the first half with the pace of Vardy too much for the visitors' defence and it was no surprise when the former Fleetwood striker opened the scoring. He anticipated Tabb's pass and went round Dean Gerken to slide the ball home from a tight angle for his 12th goal of the season.

Nugent, playing against his former club, enjoyed a simple finish to double the lead after a Christophe Berra clearance fell to De Laet, who found the striker unmarked inside the six-yard box.

Ipswich had hardly had a look in but nearly hit back with a good ball across goal by Stephen Hunt that found Daryl Murphy, but his shot on the turn was straight at Kasper Schmeichel.

Foxes substitute Wood made an immediate impact after replacing Vardy, setting up Jeff Schlupp for a fierce shot that Gerken saved at the near post.

And with two minutes to go, Wood seized on a pass from Matty James to drill a shot into the net and clinch Leicester's 12th home win of the season.

"It was a good result and good all-round performance against a decent side. I was very pleased with the outcome.

"All in all I think he is developing as a Leicester player and that is all I am really interested in. I know he is fulfilling what we thought he could achieve and I think that is very important.

"He takes the credit for what he has done. He's in the side because of his performances. Confidence is a huge part of an player's game.

"We were beaten by the better side that's for sure. But unfortunately for us we contributed to it and they don't need any help to win matches.

"Before they scored the first goal we had our best spell of the game and had had a corner kick, but went backwards instead of keeping on top of them. We end up being negative and give it away and they score.

"They don't need any assistance to win games. They are the best team by a street in the Championship. There was talk that Leicester might be tired after the midweek match at Forest. But you can't tell me that Vardy and Nugent were tired. That's all psychological babble that they might be tired.

"They are top of the league, winning it by a street and you can cope with it when you have players like they have. They will win the league by a million miles."