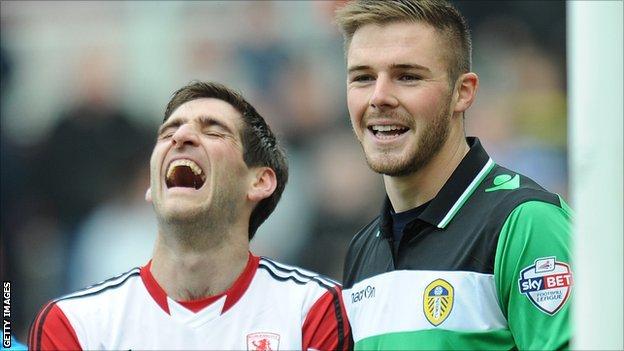 Leeds' play-off hopes continue to fade after they were held to a goalless draw at mid-table Middlesbrough.

Danny Graham twice went close after the break, Butland comfortably saving his overhead kick then watching a half-volley fizz over the bar.

The result means Leeds are now seven points off the play-offs while Boro are three worse off.

The frustration was perhaps more pronounced for Brian McDermott's side, given they felt they should have had a penalty for a challenge on Noel Hunt by Kenneth Omeruo as the Leeds man looked to get on the end of Cameron Stewart's cross.

At the other end, Leeds debutant Butland did well to tip Butterfield's dipping shot from 20 yards over the bar just before half-time.

The goalkeeper, on loan from Stoke City, was again called into action shortly after the break as he prevented Stephen Warnock's attempted clearance going into his own net.

Graham's overhead kick from close range was also straight at Butland as Middlesbrough continued to press for the opener.

Leeds, who failed to get a shot on target, were reduced to half-chances with Jimmy Kebe and Hunt both directing headers well wide, while Graham fired a half-volley just over the crossbar from a tight angle.

The best two chances of the half fell to substitute Adomah who, after being played in, saw his close-range half-volley superbly blocked by the onrushing Butland. He later sliced a shot wide after again finding space in the box.

"Yes it is six games without a goal and for that I am disappointed.

"I am always disappointed if we do not win. But if we play like we did today every week then the goals will arrive.

"We can not become obsessed by the goal. We must just continue to play the best way we can as a team and will create chances and the moment will come.

"Last week at Watford I was not happy because the team did not function as I asked. This week they did so for that I am happy.

"We had good chances, the team was good. I am not saying we deserved to win but we played well."

"That's a positive point for us.

"Middlesbrough made it difficult for us and had some good chances.

"But Jack Butland was outstanding, the back four were excellent and the whole team put in a good shift.

"When we become a good side, a side capable a challenging in this division, then maybe we could have nicked that game 1-0 but we are not quite where we want to be as a team yet.

"But we kept a clean sheet and showed resilience, we just need to find that bit extra in the final third."