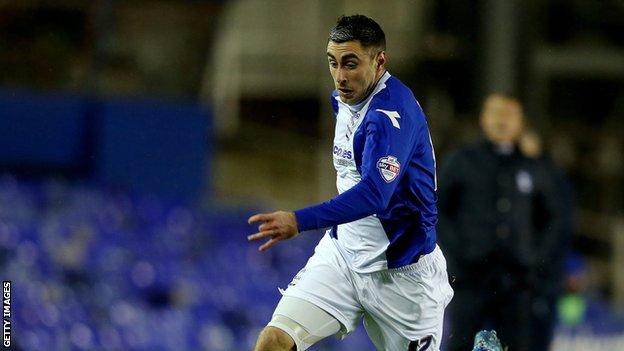 Lee Novak's double secured a 2-1 away victory for Birmingham as 10-man Blackpool failed to win for the 15th Championship game in a row.

The Seasiders went ahead when Richard Keogh volleyed in following a corner.

But Novak equalised for the visitors with a drive from the edge of the area after good work by Nikola Zigic.

And after Jack Robinson was sent off, Novak headed Birmingham to only their second league win of 2014 and lifted them above their hosts into 16th.

Blackpool's caretaker boss Barry Ferguson was hoping to record his first win since taking over from Paul Ince six games ago.

His side lived dangerously early on, Blues' Federico Macheda missing his kick with the goal gaping and then heading over from close range.

Blackpool made the most of their good fortune with loan signing Keogh putting the ball beyond Darren Randolph after Birmingham struggled to clear a corner.

Chris Burke wasted a chance to level when he failed to beat home keeper Matt Gilks after being put clean through by substitute Zigic.

But Birmingham finally drew level when top scorer Novak latched on to a knock-down from the influential Zigic and fired home with his left foot.

The home side were reduced to 10 men for the final quarter-hour when Robinson was shown a straight red for bringing down substitute Jordon Ibe when clear through on goal.

Blackpool did their best to cling on, but with eight minutes to go Novak netted his second of the game, heading low beyond Gilks from an Emyr Huws cross.

"We're in a dogfight now. Simple.

"I wasn't happy when we came in at half-time and we were only one-nil up. The game should have been dead and buried in the first half.

"We started well enough in the second half and we got a sloppy goal against us again.

"Even then we still had chances in the second half we should have put away. We're not clinical enough.

"I'll never stop learning and improving and I'll do that again on Monday."

On loan signing Jordon Ibe from Liverpool: "Not bad is he? Not bad. Power, pace.

"We've done unbelievable to get him, I've got to thank (Liverpool manager) Brendan Rodgers. I've pestered him to get him.

"There were so many other clubs in for him.

"So hopefully this reputation I've got where I can do not-too-bad things with these big clubs' young players is helping us get the edge over some of my rivals, in terms of trying to help them on in their development.