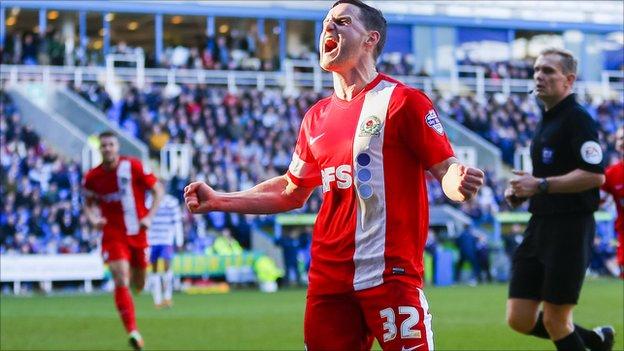 Conway, on his first start for the club, drove in an angled shot that went in via the outstretched leg of Reading captain Jobi McAnuff to seal victory.

Reading keeper Alex McCarthy prevented Jordan Rhodes from making it 2-0 with a fine save from his fierce drive.

Royston Drenthe went close to levelling with a powerful drive that flew over.

That was as near as Nigel Adkins' side came and, although they remain in the play-off places, they are just one point ahead of Wigan, who have a game in hand.

The hosts had chances to strengthen their position in the top six but endured a frustrating afternoon. McAnuff weak early effort after he was fed by Pavel Pogrebnyak was a sign of things to come.

Blackburn had threatened only sporadically - Rudy Gestede firing wide from a good opening - when they went ahead in the 36th minute from a breakaway.

Jordan Obita had a free-kick blocked by the wall at one end and the visitors countered swiftly.

Chris Gunter made a poor attempt at a clearing header and Rhodes fed Conway after winning the ball from Kaspars Gorkss. The Scot's low cross-shot appeared to be heading wide but took a generous deflection off McAnuff on its way past McCarthy.

McCarthy prevented Rhodes from making it 2-0 soon after with a fine save from a fierce drive, and the visitors also went close after the break when no one was on hand to touch home Tommy Spurr's superb skidding cross from the left.

Adkins had seen enough and made a triple substitution in the 62nd minute, bringing on Drenthe, Hal Robson-Kanu and Danny Guthrie.

The changes almost worked when Obita's centre evaded everyone apart from Drenthe at the far post, but the former Real Madrid midfielder scuffed his shot wide.

The Dutchman went even closer, with a powerful attempt that just cleared the crossbar, but Blackburn held on despite more than nine minutes of stoppage time.

"We've been in good form and had good momentum, but, unfortunately, we haven't capitalised on that today.

"But we've been in this position before and we know what is required. As far as getting in the play-offs is concerned, I think we've got as good a chance as anyone.

"It was not a great game. It was a bit stop-start and Blackburn obviously came here to slow the game down. All credit to them. But the spirit is still strong, we'll put this one to bed and just move on."

"This is a very tough place to come and I knew it was going to be a difficult afternoon.

"I was delighted at how we went about it, it was an impressive display. It was a great counter-attack for the goal, although it did take a bit of a deflection, and I was delighted for Craig.

"It was not the most attractive of games, but it was such a great team effort from us. It was massive."