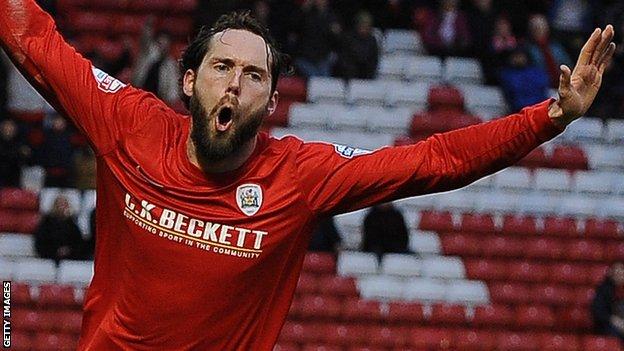 Jim O'Brien scored the only goal as Barnsley moved to within two points of exiting the relegation zone with a win over fellow strugglers Millwall.

Just four minutes in, O'Brien latched on to a Martin Cranie ball, rounded keeper David Forde and slotted in.

But Barnsley, who had a Peter Ramage header cleared off the goalline, held on to secure the victory.

The defeat left Millwall one place above the relegation zone, with the Tykes just two places and two points below them with a game in hand.

Both teams had won just one of their previous 12 league games, and O'Brien's goal, from the first chance of the match, proved the difference.

The visitors gradually came back into the game after the early goal and, after a mistake by Tykes defender Ramage, on-loan striker Campbell shot just wide from the edge of the 18-yard area.

Luke Steele then denied Morison before Ramage's header from a corner was cleared by Shane Lowry.

Millwall, whose only away win of the season came at Charlton in September, rarely looked like getting an equaliser and have gained only three points from their past six games.

"We know the value of three points at this time of the season and it was much-needed against one of the teams that are down there with us.

"I'm delighted to get the result and collect all three points.

"There was a lot of big performances there and it's those types of performances that are required at this time of the season and we're well aware of that."

Millwall manager Ian Holloway: "We've got to stick together as a team. We've got 14 games left, things have got a lot harder after this result but they were going to be hard anyway.

"We stayed up by one point last year, does anybody see it any differently [this year]? It might have been different if we'd got the right result against Barnsley.

"A draw would've kept them [Barnsley] away from us but now that's given them a chance, that's lifted their spirits and we've just got to show some character, which our club is full of."