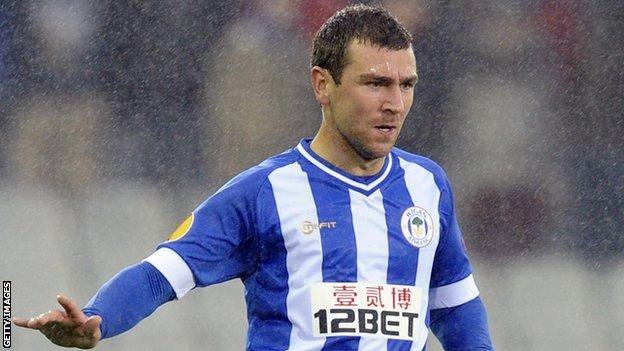 Wigan survived a late onslaught to win for the fifth time in six games with victory at Brighton's Amex Stadium.

James McArthur gave the Latics the lead when he struck a left-footed effort past goalkeeper Tomasz Kuszczak.

Chris McCann doubled the lead after the break with a 12-yard header from Martyn Waghorn's inswinging corner.

Leonardo Ulloa reduced the deficit in the 78th minute with a close-range strike, while Brighton's Jonathan Obika and Andrea Orlandi also went close.

Victory took seventh-placed Wigan to within a point of a play-offs with their hosts three points adrift in eighth.

Brighton were on top early in the game and David Rodriguez should have hit the target after Dale Stephens played the ball across the six-yard box, before Wigan keeper Ali Al Habsi did well to block a goalbound shot from Ulloa.

The Latics then had another lucky escape when Stephens rose unchallenged and put a firm header just over from Stephen Ward's cross.

A mistake by former England international defender Matthew Upson led to Wigan breaking the deadlock on 21 minutes through McArthur, who burst through before beating Kuszczak.

Midfielder McCann increased the lead five minutes after the break, when he ran across the penalty spot to head in Waghorn's delivery.

Brighton piled on the pressure with Orlandi driving a shot into the side-netting, before Rodriguez sent a glancing header wide.

Ulloa finally made it 2-1 when Upson headed back Orlandi's corner and the home side almost snatched a draw but Ali Al-Habsi was at his best to deny substitute Obika.

"This was a big win for us and it is dedicated to Ben Watson, who broke his leg in midweek.

"He had his operation on Friday and the reaction of the players to his injury was first class.

"They showed will power to get that win and not to get beaten.

"For the last 15 minutes it was backs to the wall and fortunately lady luck was on our side."

"We had 20 chances yet we only scored one goal. Wigan had two chances and scored two goals.

"We should have scored more than two for sure; we fully deserved to win. We dominated the whole game.

"I can take positives from the performance, but what is less positive is that we need to be more clinical in front of goal."