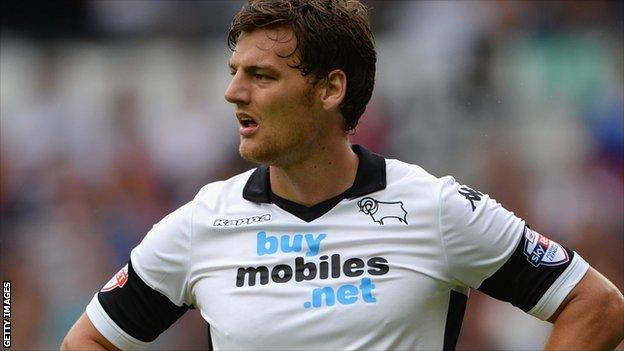 The visitors were the better side in the first half but wasted chances, the best when Matt Ritchie hit a post.

But Martin curled a 20-yard free-kick into the top corner to clinch another three Championship points.

The result keeps them two points behind second-placed Burnley, who they play next Saturday.

Bournemouth are now just nine points clear of the relegation places after the bottom three all won but could have taken more from the game.

Ritchie was close to giving the visitors a shock lead in the 16th minute when he smashed a low shot from 18 yards against the foot of Lee Grant's left post.

There was another scare for Derby in the 20th minute when Tokelo Rantie set up Lewis Grabban, who drifted across the box before firing just wide. Rantie's pace then created danger when Richard Keogh almost divert the ball into his own net three minutes later.

Bournemouth had another opportunity in the 27th minute when Grabban cleverly turned Andre Wisdom and raced clear on the right, but his finish lacked the power to beat Grant.

Derby had been flat and Steve McClaren made two changes at the start of the second half with Connor Sammon replacing Patrick Bamford and John Eustace giving way for Simon Dawkins.

There was certainly more urgency about the home side after that and the substitutes combined in the 53rd minute when Dawkins pulled the ball back from the left and Sammon was foiled at the near post by former Derby goalkeeper Lee Camp.

The promotion chasers were starting to pressurise the Bournemouth defence and they almost scored in the 67th minute when Martin's low cross found Johnny Russell at the back post but he was denied by a goal-line clearance.

However, the goal Derby had been threatening finally arrived in the 85th minute when Will Hughes was tripped just outside the box and Martin curled his free-kick from 20 yards over the wall and into the top-left corner of Camp's goal.

"It was a game of two halves and 0-0 at half-time was a great score for us.

"They had kind of missed their chance and we knew that and knew we would have ours. We were waiting for that one moment of quality and in the end we got it.

"We took a risk to win the game, other days it won't work but today it did. It depends what kind of team you've got and with this team, we can open it right up, we have the quality in the squad.

"This team is attacking and scores goals and sometimes, you have to let them loose."

"We performed really well in the first half and should have been ahead.

"It was more backs to the wall in the second but I thought we defended really well and couldn't see Derby scoring from open play, it was a really good rearguard display.

"We feel hard done by with the goal and how it came about but that's life for us today I'm afraid.

"My immediate reaction was that it wasn't a foul, I thought Tommy (Elphick) took the ball, he's an honest player and his reaction spoke volumes.

"But we created good chances and had good situations we didn't make the most of but the pleasing thing for me today was the never-say-die attitude, the players never gave up, even late into the game when we were trying to get a point."