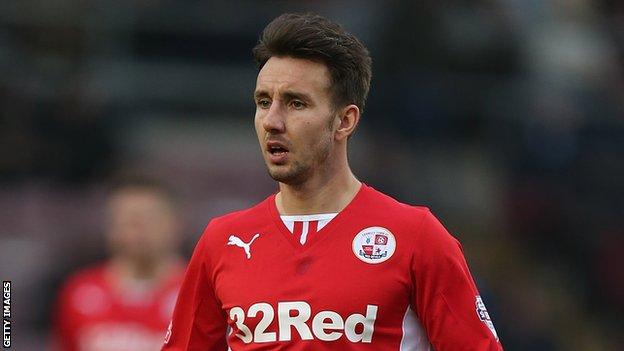 Matt Tubbs scored twice as Crawley beat Walsall in their first game in a month.

Tubbs opened the scoring from the spot after home captain Andy Butler accidentally handled in the box.

The striker doubled his tally after the break when he headed in Billy Clarke's fine far-post cross from six yards.

Sam Mantom pulled one back for the Saddlers as he met Craig Westcarr's corner before Clarke was sent off when he received a second yellow card for time-wasting, but Crawley held on.

Crawley, who had not played since their 2-2 draw with Rotherham on 25 January, remain just two points clear of the relegation zone.

However the Sussex side have up to seven games in hand on some of the clubs at the bottom of the League One table.

Walsall, who are now without a victory in five games, sit five points off a play-off spot in seventh place.

"We knew today was going to be a very tough game but I felt we got a good start which helped when we got the penalty.

"Walsall got back into the game and we had to hang on at the end but we showed an enormous amount of resilience to withstand the pressure in the last 20 minutes.

"You can always tell how much you are under pressure by what your goalkeeper has done and Paul Jones didn't much to do today.

"The longer the game went on the more comfortable I got."