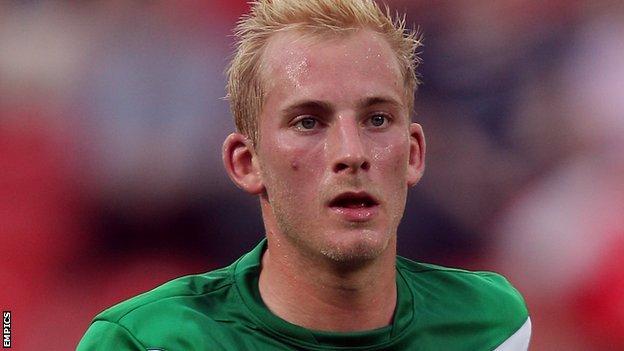 Midfielder Syers struck early with a deflected shot and Gary McSheffrey's superb backheel set up Sam Winnall for his 17th of the season.

Paddy Madden set up Syers for his second and then tapped in his first for the club just after the break.

The hat-trick took Syers' goal tally against Portsmouth this season to five, having scored both in a 2-1 win at Fratton Park in November.

The victory extended Scunthorpe's unbeaten run to 16 matches, and there was the added bonus of moving level on points with League Two leaders Chesterfield, who lost 1-0 at Wycombe.

"It was really pleasing, we've just got to keep our feet on the ground.

"It was probably the most complete attacking performance without a doubt - great to see Paddy Madden on the score sheet with his first goal for the club.

"I'm a bit disappointed that Paul Hayes didn't stick one of those two away - two great chances, the first one he'd done everything right and credit to the keeper."

"It is (hurtful) to see a performance like that from the side because they've done everything that was needed to be done throughout the week.

"They picked up every second ball, they were just more ruthless than us and they look like a team who obviously are mentally in a good place, but that's no excuse from us.

"We were outworked today by Scunthorpe - irrelevant of the playing stuff, outworked. They won every 50-50 challenge, they were stronger than us, they competed better than us."