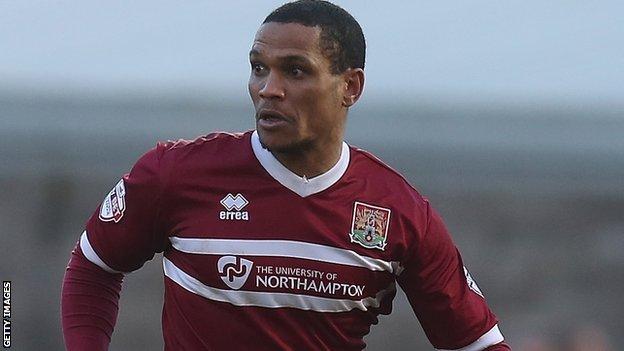 John Marquis volleyed over the bar and Emile Sinclair got an overhead attempt on goal before Mathias Kouo-Doumbe nodded the hosts in front.

Chris Hackett whipped the ball in for Brennan Dickenson to make it 2-0 with a close-range header after the break.

The visitors, who stay ninth in the table but slip seven points behind Southend in the play-off places, also suffered an injury blow after defender Michael Duckworth was stretchered off on 11 minutes. Duckworth will be undergoing scans in the coming days to uncover the extent of his injury.

"I think everybody has got to enjoy results like this, especially when they haven't been great this season.

"It's not New Year's Eve, I'm not going to be partying at home until two in the morning, but I'll certainly feel good about my weekend and I hope the supporters do too.

"You have to enjoy your wins and I'm happy that we look as if we've given ourselves a fighting chance with a performance like this.

"There's a third of the season to go and a lot of points to play for."

"To let them get their noses in front before half-time really gave them something to cling onto and fight for. They did that in the second half, and without being clever they just tried to pin us back.

"After Michael's [Duckworth's] injury the whole day was a little bit flat for us. He said he heard a snap or a pop, which is a worrying thing. Thankfully, there is no serious damage as yet - there is no major damage to the bone which is good.

"But the extent of soft tissue [damage] we will probably not know until Monday or Tuesday. The positive thing is that he has been to hospital and comes back on the team coach, which I'm pleased about."