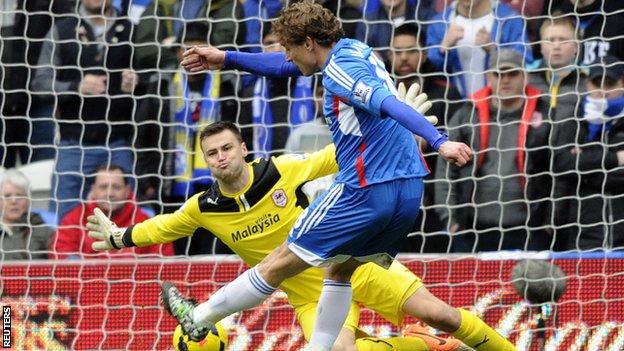 Hull took a big step towards Premier League safety by thrashing Cardiff to leave their hosts deep in trouble.

Steve Bruce's side move up to 11th, eight points clear of Cardiff in 19th.

A positive opening for the hosts had seen them looking to attack down the flanks at every opportunity and attempting to create space between Hull's three centre-backs.

Moments later Kenwyne Jones' strong run and shot forced the Scotland international to parry the ball behind for a corner.

But as Cardiff pressed, Hull looked to counter - and the Tigers took the lead with their first real chance of the game.

As half-time approached, Long broke clear of the Cardiff defence and his low cross was converted by Jelavic into the bottom corner of the net.

The home fans greeted the half-time whistle with boos, but after the break things only got worse for the Cardiff faithful.

Ton up for Bruce

Jelavic had wasted a great chance form six yards but made amends when he headed the ball into the corner of the net for his second and Hull's third, following a pin-point cross by Liam Rosenior.

The trickle of departing home fans were joined in greater numbers 10 minutes later when Ahmed Elmohamady intercepted Andrew Taylor's pass on halfway, ran to the edge of the area and squared the ball for Livermore to place the ball past Marshall.

The result - Hull's biggest away win in the top flight - also gave Bruce his 100th Premier League win as a manager. More importantly, it moves the Tigers six points clear of the relegation zone.

For Solskjaer, who had targeted this match as a potential win, it is now five defeats from his seven Premier League matches in charge - and the Bluebirds remain deep in relegation trouble.

For a selection of images from today's matches go to the BBC Sport Facebook page.