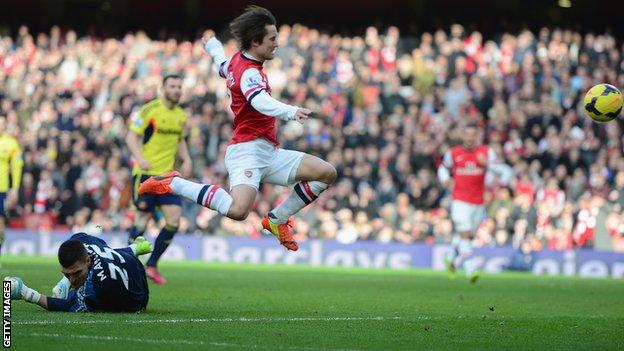 Olivier Giroud marked his return to action with two goals as Arsenal swept aside lowly Sunderland to stay a point behind Premier League leaders Chelsea.

He stroked home an early opener after a deflected Jack Wilshere shot fell to him, and capitalised on a poor Santiago Vergini back-pass for his second.

Giroud had sat out the Gunners' previous two games, with manager Arsene Wenger insisting the French striker needed a rest.

But he looked thoroughly refreshed as he tormented a Sunderland team with one eye on their Capital One Cup final appearance next week.

Even without the injured Mesut Ozil, who shone on his debut in Arsenal's win at the Stadium of Light in September, Arsenal were rarely troubled by Gus Poyet's team.

They produced the perfect response to their midweek Champions League defeat by Bayern Munich and showed few ill effects of playing half of that match with 10 men.

In fact, the Black Cats had barely touched the ball when Arsenal grabbed a fifth-minute lead as Giroud ended a run of four games without a goal.

Lukas Podolski and Rosicky were involved in the build-up, allowing Wilshere to drive into the box, where his shot hit Phil Bardsley. When the ball rolled to Giroud, the Frenchman reacted quickly to drill a low shot past Vito Mannone.

Mannone, back at the Emirates for the first time since his summer move north, was left helpless when Vergini gifted the Gunners a second.

Arsenal return to winning ways and do so by winning in style. Sunderland now have a Capital One Cup final to look forward to but this game was all about Arsenal and what we have learned is that they are not going anywhere in this title race.

Making his first Premier League start, the Argentine central defender failed to notice Giroud lingering in the box when he attempted to pass back to his keeper and the Gunners striker clinically slid the ball past the exasperated keeper.

There was further pain for Mannone just before half-time as Rosicky sealed a wonderful Arsenal passing move with a close-range finish.

The midfielder took return passes from Wilshere and Santi Cazorla before finding Giroud in the box and running on to the forward's cute pass to clip the ball over the keeper.

Vergini's nightmare day nearly got worse when he sliced a Bacary Sagna cross just past his own post.

But from the resulting corner Koscielny got away from Bardsley and planted home a free header from eight yards out.

With victory assured, Arsenal eased off and Sunderland came into the game.

Ki Sung-Yeung forced a superb save from Wojciech Szczesny, but the Pole could do little to keep out Giaccherini's strike.

Having punched away a corner, the keeper must have thought he had cleared the danger but Giaccherini fired a low volley just inside the post.

It did no more than spoil Arsenal's run of clean sheets though.

"After playing for so long with 10 men in a difficult game in midweek against Bayern Munich it was good to win today. The three points are welcome.

"Tomas Rosicky's goal was one of the best [we have scored] and one of the two Olivier Giroud goals is a great goal. That is the way we want to play and when we score it makes you happy because it enforces the way you want to play.

"We are still there in the table. It is down to consistency and our performances. It was important to win the game. We lost to Liverpool and drew with Manchester United. We needed to win this game."

"The combination of Arsenal playing well and us being poor on the ball made it difficult for us.

"We needed to be organised and see the danger but they punished us. Then we made a mistake for the second goal, which we never make, and that made it tough.

"Wembley could have been on the players' minds but this was a very good wake-up call. If we play like this against Manchester City we could be embarrassed."