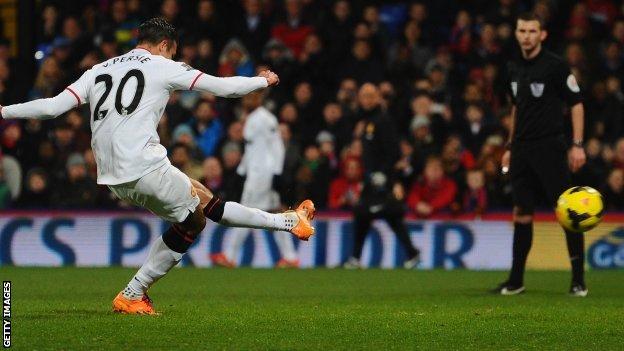 Rooney had a first-half cross cleared off the line by Damien Delaney before Marouane Fellaini shot wide.

And Rooney doubled the lead with a shot into the top corner from 12 yards.

The England international, who signed a new five-and-a-half-year contract worth up to £300,000 per week on Friday, had gone five games without a Premier League goal or an assist.

But the 28-year-old, who looked to have something thrown at him by a Palace fan when taking a corner in the first half, showed why United were so keen to secure his future at Old Trafford with a stunning goal.

David Moyes's men travel to Greek side Olympiakos on Tuesday in the first leg of their Champions League last-16 tie, knowing that competition is their last realistic chance of winning a trophy this season.

But Saturday's win moved them up to sixth in the Premier League, just eight points off the top four and Champions League qualification for next season.

Just two wins and two draws in seven league games in 2014 had left them 11 points adrift of fourth and hoping all of Liverpool, Tottenham and Everton will falter.

Fit-again £27.5m summer signing Fellaini had an early impact on his first start since early December and could have given his side the lead had he connected better with a half-chance inside the penalty area.

Adnan Januzaj, making his first start since early January, was also looking a danger and had a goal disallowed after controlling a cross with his arm before drilling low into the net.

But Palace, who gave last season's top-scorer Glenn Murray a first start for nine months, are a different proposition under Tony Pulis, who has guided the Eagles off the bottom of the Premier League with 19 points won since he took charge in late November.

Michael Carrick, making his 400th Premier League appearance, completed 135 passes against Crystal Palace, more than any other player in a single PL game this season.

Their defence was looking organised and resolute under pressure, though Delaney had to head Rooney's chipped cross off the line before Nemanja Vidic headed the rebound over.

For all United's possession, there was a lack of cutting edge and pace, but they should have been ahead when Fellaini shot well wide from close range just before the break.

He was let off after the restart as a rash challenge from Chamakh gave United the break they needed, with Evra upended just inside the penalty area as he ran onto Januzaj's pass. Van Persie coolly dispatched the penalty.

Cameron Jerome had a low shot saved by David De Gea before Rooney doubled United's lead, crashing a 12-yard strike into the top corner from Evra's cross from the left to leave Palace two points above the relegation zone.

"Marouane Chamakh has done fantastic since I have come here. Today he was not as great in possession of the ball, he was sloppy at times, but the challenge for their penalty, he is totally committed and he has mis-timed it. It is a penalty.

"Wayne Rooney's goal is a great finish but we work very hard on picking up and one or two of the lads were on the goal line but not picking players up. Players score goals.

"I am disappointed with the second goal as much as the first. When they got the penalty that was our best period.

"The penalty was really a kick in the teeth. No excuses at all though."