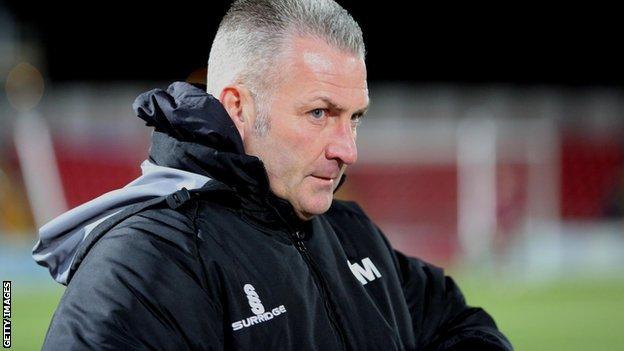 Gateshead took a home a point despite Marcus Maddison's goal being cancelled out by Tom Shaw's equaliser.

The away side were forced to play with 10 men for almost an hour after Phil Turnbull picked up two yellow cards.

However, they took the lead after half-time when Maddison headed in his sixth of the season from James Curtis' cross.

Alfreton levelled when substitute Shaw tucked home from John Akinde's pass, but Paul Clayton wasted a clear chance to win it by heading over the bar.

The draw keeps the Reds, who gave a debut to on-loan Barnsley full-back Andrai Jones after he joined on Friday, third in Conference Premier.

"It has given us a big lift after losing to Woking last Saturday because this performance was excellent.

"We were the better team, even with 10 men, and I'm disappointed to come away with only a point because I couldn't see Alfreton scoring.

"This was a big game for us and when you look at the league table, we are there or thereabouts with 13 games to go.

"To even be in with a chance of getting into the play-offs is a fantastic achievement. It's exciting."