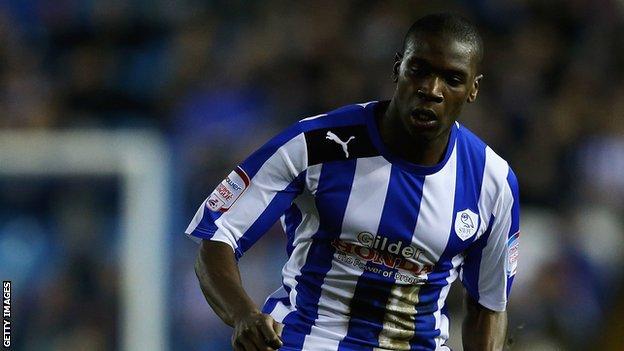 Goals from Jeremy Helan and Jacques Maghoma helped Sheffield Wednesday win at Huddersfield and extend their unbeaten away run to nine games.

Helan - booked twice in this fixture without being dismissed last season - fired his side ahead before the break.

Maghoma added a second on 72 minutes following good work from Sam Hutchinson on his full debut for Wednesday.

Adam Clayton's late shot against the bar was the best chance for the hosts, who are a place above the Owls in 14th.

The win was a confidence booster for Stuart Gray's side before Monday's rescheduled FA Cup fifth-round tie with Charlton, with a quarter-final derby clash with Sheffield United the prize for victory.

Wednesday went ahead when Frenchman Helan took advantage of a ricochet in the box to drill a low shot into the bottom left corner on 40 minutes.

The 21-year-old's pace caused problems on the break throughout the game, notably twice early in the second half when he hit the side netting and had a shot blocked after sprinting clear.

Huddersfield were seeking a third win in four matches but lacked punch up front despite dominating possession.

And they fell further behind when Hutchinson - a transfer window loan signing from Chelsea - set up Maghoma for a close-range finish.

Clayton, who had scored twice in his last three outings, hit the woodwork for the Terriers in the last minute with a 25-yard effort and Danny Ward headed over a Paul Dixon cross in stoppage time, but the Owls held on to close to within four points of their Yorkshire rivals.

"We have players who are willing to put their bodies on the line.

"A good defender has a good habit of getting hit by the ball and fortunately we have good defenders. We showed good legs and great team spirit."

"I could go ranting and raving and while that might make me feel better it won't do any good.

"You can count on the fingers of one hand the number of poor performances we have had this season. Our play in the final third was non-existent at times.

"Possession is vanity if you don't do anything with it.

"The crowd see you doubting yourself and the fans get on your back. The supporters need to stay with us because we have some young lads in the team."