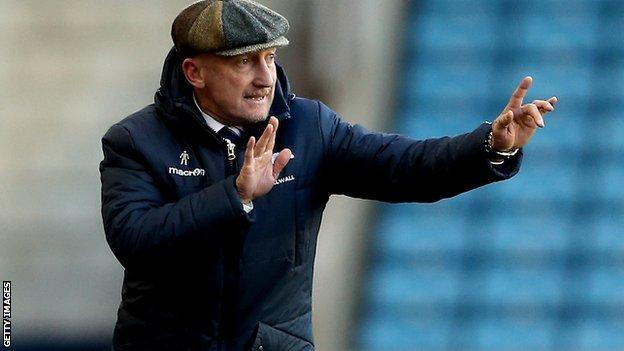 Millwall boss Ian Holloway called Bolton's style of play "boring" after his side were held to a 1-1 home draw.

The Trotters took the lead through Lukas Jutkiewicz before Martyn Woolford levelled late on after home keeper David Forde saved a Jutkiewicz penalty.

Dougie Freedman's side have scored 35 goals in their 31 league games, four more than the Lions.

"I'm deadly serious when I say you'd be bored senseless watching that kind of performance from them," he said.

"If that's how you set out to play when people pay a lot of money to watch I'd be bored senseless."

He added: "They had one cross, one diving header and it went in off the post. And then they got a penalty, but it was a massive save [for us]. Everything is massive for us at this point."

The Trotters are only two places and two points above Holloway's side after a run of nine games without a win.

Holloway has seen his side win just one of seven matches since taking over from the sacked Steve Lomas last month but the former Blackpool and Crystal Palace boss believes his team are improving.

"We're getting fitter and more confident. It's all about scrapping but we scrapped with style today," he said.

"What more can I ask of my players? If they keep giving what they gave today I will be happy. The understanding and recognition of what I want is coming."