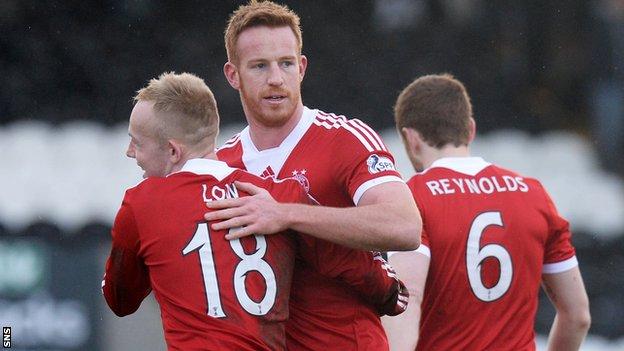 It's important that we have that winning mentality and I think we had it today," Docherty told BBC Radio Scotland's Sportsound programme.

"We didn't play at our best, up to the level of performance in our previous games but we dug a result out."

I think you pay credit to the defence, to keep another clean sheet and Jamie Langfield had a fantastic save.

Derek McInnes' side travelled to the west of Scotland from the north-east off the back of cup wins against St Johnstone and Celtic.

Aberdeen are in the final of the League Cup and have progressed to the last eight of the Scottish Cup, whilst maintaining second place in the Scottish Premiership.

"We managed to get the win and that's what it's all about.

"Our fitness levels are very high, it's no coincidence the amount of goals that we score late on.

"We're never beaten. I think you pay credit to the defence, to keep another clean sheet and Jamie Langfield had a fantastic save. He's been so important for us this season. He's come up with countless saves like that.

"All that combined, we're beginning to look like a team that knows how to win."

The penalty was awarded following Eric Djemba-Djemba's challenge on Peter Pawlett and Rooney netted his third goal in four games.

"I think it's a good decision by the referee," added Docherty.

"He [Rooney] has done well, he's added something to the team."