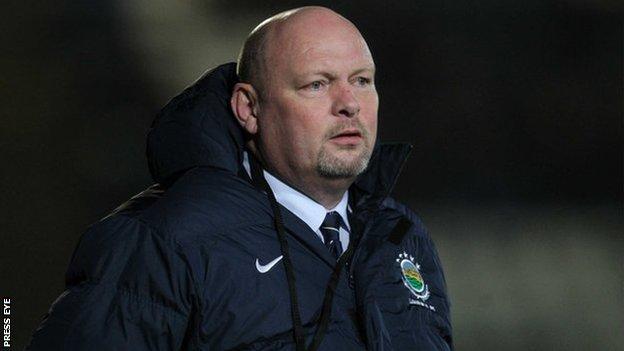 David Jeffrey has announced he is standing down as manager of Irish Premiership club Linfield at the end of the season.

Jeffrey is currently one short of Roy Coyle's tally of 31 trophies as manager of the Irish League's most successful club.

He could break that record if the Blues beat Crusaders in the County Antrim Shield final on 4 March and then regain the Premiership title.

They are currently second in the Premiership table, one point behind champions Cliftonville but with a game in hand.

Last Saturday Linfield were beaten at home by Ballymena United in the sixth round of the Irish Cup.

"I have concluded that it really would be in the club's interests, and my interests, if I stepped down at the end of the current season," Jeffrey said on Linfield's website.

"With my situation clarified, I believe our players will be free to play to their full potential and be fully focused on winning back the Gibson Cup and the County Antrim Shield.

"I am unequivocal that the end of the season will be the right time for my time as manager of this great club to come to an end."

Jeffrey, who was a central defender with Linfield after spell with Manchester United at youth level, stepped up to the position of Linfield manager following Trevor Anderson's surprise move to Newry.

In the 2005-06 season, Jeffrey guided Linfield to a clean sweep of domestic trophies - the league and cup double, league cup and Antrim Shield.

In May 2012, Linfield completed the Premiership and Irish Cup double for the sixth time in seven seasons.

He was voted manager of the month on a record 32 occasions, the first coming in February 1998 and the most recent last December.