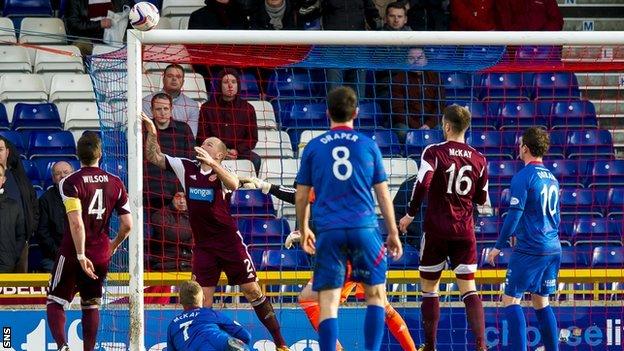 Hearts manager Gary Locke acknowledged the progress his young side have made over recent months.

On Saturday they drew 0-0 with Inverness Caledonian Thistle in an action-packed game in the Highlands.

"We came up here earlier in the season and Inverness beat us 2-0 that day and were all over us," Locke said.

"You can see there's been a big improvement in the young players over the last four or five months. Today they stood up and weathered the storm."

Hearts are 16 points adrift at the foot of the Scottish Premiership, with Partick Thistle the team closest to them.

An inspired performance from Jamie MacDonald at the Caledonian Stadium was required to repel the efforts of Inverness attackers on several occasions.

Caley Thistle also hit the woodwork four times, although Hearts did come into the game in the second half with Dale Carrick and Jamie Hamill spurning good opportunities.

"It was a fair result," Locke told BBC Scotland. "The conditions played a big part, we had a strong wind against us first half.

"Second half we came out and played really well and could've got a couple of goals ourselves. Over the piece a draw was probably the right result.

"In the second half we looked dangerous and I thought Sam Nicholson looked really dangerous every time he got the ball."

Locke was pleased to go another game without defeat in the normal 90 minutes, with a Scottish League Cup semi-final loss on penalties their only recent reverse.

"You look at the last five games, we're unbeaten. On another day we might have come away with three points. But all in all I think a draw was a fair result."