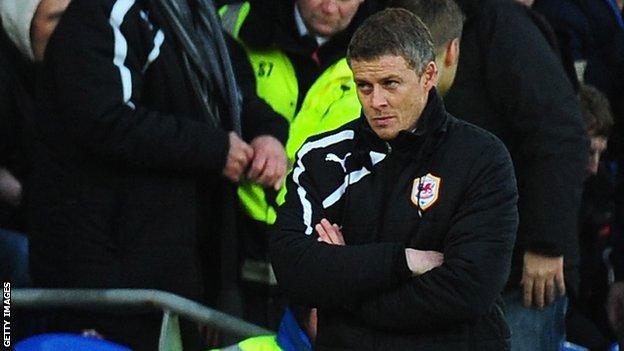 Ole Gunnar Solskjaer says Cardiff City had enough chances to beat holders Wigan in the FA Cup and hopes his players' confidence does not suffer.

Cardiff return to the fight against relegation from the Premier League against Hull City next Saturday.

"It gives us a [confidence] blow. You don't want to lose," said Solskjaer.

"Everyone who loses games suffer a little bit of that confidence dip.

"So knowing these lads, they're probably made of the same stuff as I am.

We didn't score the goals, defended poorly for the first goal and wasted a few chances ourselves before half time

"We wanted to take that into the cup and into the Hull game.

"Now we've just got to discard this one and look at the last two [home] league games - four points at home; hopefully we'll make it seven [against Hull]."

However, Solskjaer hopes his players can find their goal-scoring touch when they resume their Premier League campaign.

"If you look at the game [against Wigan ]in terms of possession [and] chances, you'd think we should have won the game," Solskjaer

"But you're disappointed when you don't because you've got two thirds of the possession, probably, and probably twice the number of shots they have.

"But we didn't score the goals, defended poorly for the first goal and wasted a few chances ourselves before half time."

He praised "good friend" Uwe Rosler for guiding Championship side Wigan to their triumph and urged his players to work hard in pursuit of top-flight survival.

"They [Wigan] are a good side. They are the holders. He's [Rosler] done really well with them for the months he's been there.

"They play good football, they've got good players - probably got more Premier League experience than we have - so of course we didn't play mugs, we played a good team with good players.

"I don't know any other way than work hard, believe in what you're doing, don't feel sorry for yourself.

"That's the only way to get out of a bad spell as a footballer, as a team, as a club and that's what you've got to do.

"You've got to believe in each other, trust in each other and we've got a big, big game next weekend - Hull."