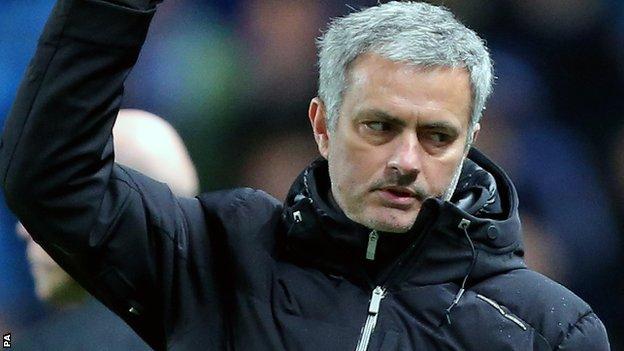 Chelsea manager Jose Mourinho insists his team did not fail him in Saturday's FA Cup defeat by Manchester City.

"I don't say my team failed," Mourinho said afterwards. "I would say that City played much better than us and deserved much more to win.

"The game was simple to analyse - they were the best team, and they won."

Chelsea have beaten City twice in the league this season, including an impressive 1-0 win in Manchester on 3 February that ended City's 100% home league record, but it is Manuel Pellegrini's side who will progress to the quarter-finals of the FA Cup after a convincing display.

Striker Stevan Jovetic, who also hit the bar, opened the scoring in the first half before midfielder Samir Nasri, making his return from injury, rifled home following a neat one-two with David Silva.

Mourinho felt City's second goal was offside but conceded it made little difference to the outcome in a game where his side only managed three efforts at goal, with none on target.

"What happened in this tie gives more credit to my players because it proves it is difficult to win twice against City in a season, and to win here.

"Was the referee's team poor in the second half? Yes. But even with perfect refereeing team, would Chelsea have won the game? No.

"Their second goal was an offside but they would win 1-0 anyway because we were never close enough to score or to be dominant or to scare City in the game."