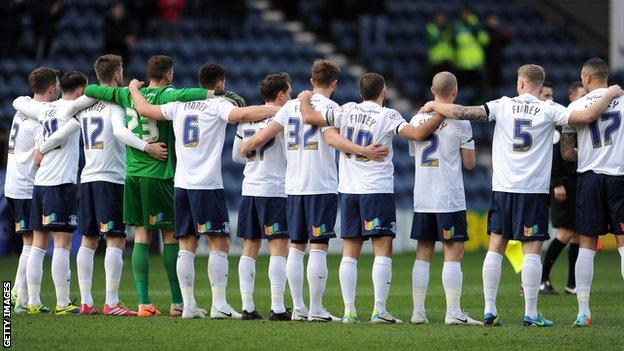 There was clear excitement in the voice of the father as he told his son that one of the scarves placed on the statue of Sir Tom Finney outside Preston's Deepdale stadium was in the colours of Blackpool.

His child, not more than five or six, looked confused. "But why Dad? Why is it there?"

The answer was clear and affirmative. "That, son, is the respect for the man."

"Tom was the all round versatile player. He was a good tackler, good in the air and brave as well.

"He is one of the greatest sportsmen produced on these islands.

"Tom couldn't have stayed at Preston if he was a player in the present day. He would have been at Real Madrid for Gareth Bale type of money."

The man was Finney, the verdict on him unanimous.

There was a note by the scarf: "The last of the true legends."

In these days of third-tier football there is rarely much activity outside North End's ground two hours before kick-off but that was not the case on Saturday as a city prepared to pay tribute to its most famous son.

There was the queue outside the ticket office, the media seeking interviews and the fans gathering to lay flowers, shirts and scarves on The Splash statue, which is based on a famous photograph of Finney taken at a match at Chelsea in 1956.

It was supposed to be a big day at Deepdale anyway as Preston, fourth in the League One table, entertained an out-of-form Leyton Orient clinging to third place, but the passing of Finney had transformed it into something entirely different.

In other places it is the clocks that stop, in Preston on Saturday it was the water.

It had stopped flowing over the Splash statue, which had become a focal point after news of Finney's death, at the age of 91, had started to circulate around the city centre late on Friday evening.

A taxi driver drove past it at the end of his shift in the early hours of Saturday morning and was amazed by the tributes that had already amassed despite the atrocious wind and rain.

Just up Sir Tom Finney Way on Saturday lunchtime the Sumners pub was rammed with fans talking about the man who always represented their city with pride and distinction during a 14-year career at Preston North End.

It was in the same pub where Finney's father Alf worked as a waiter back in 1936 and approached North End's trainer Will Scott to enquire about a trial for his 14-year-old son.

That was the start of a journey between player and club that only ended when he died on Friday, although in a sense it will never really finish. He will always be indivisible with Preston and regarded as its favourite son.

He retired as a player in 1960. North End had averaged 15,000 that season but 27,000 people crowded into Deepdale for his last league appearance, against Luton in late April.

Preston have averaged in the region of 10,000 this campaign but there were 13,440 inside Deepdale on Saturday to say their farewells.

Before kick-off a large banner with the words 'Sir Tom Finney - Preston Legend' on it worked its way around the stadium.

A video tribute to Finney on the screen above the Bill Shankly stand prompted a spontaneous outburst of applause from all inside the ground.

In fact, just about everything that happened felt spontaneous. With so little time between Finney's death on Friday and the match the following day it could not have been any other way.

But in a way the simplicity and understated nature of the celebration of Finney's life was entirely in keeping with a very humble individual.

Every North End player wore the name Finney on the back of his shirt (apparently this confused several players when they entered the Preston dressing room). In the centre circle a wreath of flowers was given to Tom's son Brian and his grandson Paul.

Before Finney's final league appearance the crowd sang Auld Lang Syne before breaking into a rendition of For He's A Jolly Good Fellow.

On Saturday the minute's silence was impeccably observed. The only sounds to be heard was the cry of a child and a blast of wind rattling on the microphone of the stadium announcer.

Seven minutes into the match applause broke out all around the stadium - another tribute to the man who wore that shirt number for so long.

You still often hear it debated - who was better, Sir Stanley Matthews or Finney?

Impossible to say, but both would have stood out on Saturday.

It was a mediocre game of football that saw Orient take the lead just before the break and North End equalise from the penalty spot in the second half.

North End do not play with out-and-out wingers these days but left-back Scott Laird at least delivered a few crosses that Finney would have been happy to call his own.

And without doubt, the result was secondary to the occasion.

Jimmy Armfield, Blackpool's equivalent of Finney, was at the game. Adversaries on the pitch but great friends off it, the 78-year-old reckons that he was close to tears when he heard that an increasingly frail Finney had made the trip to Blackpool last year to have his photograph taken by the statue of Armfield outside Bloomfield Road.

"Tom Finney? He came to see my statue?" was his reaction at the time.

Asked how he would describe Finney, Armfield said: "Total humility, he would not have understood what all the fuss was about."

But a fuss there was - and deservedly so.

Not that it felt that way at the final whistle. Players shook hands and trooped off to the dressing rooms and the fans made their way to the exits and out into the Lancashire night.

I heard one woman say to her child as they made their way out of the ground: "In years to come you will be able to say that you were there."

The child didn't look particularly impressed but it was undoubtedly that sort of day.

As one fan had written on a North End shirt that he left outside the ground: "RIP Sir Tom.