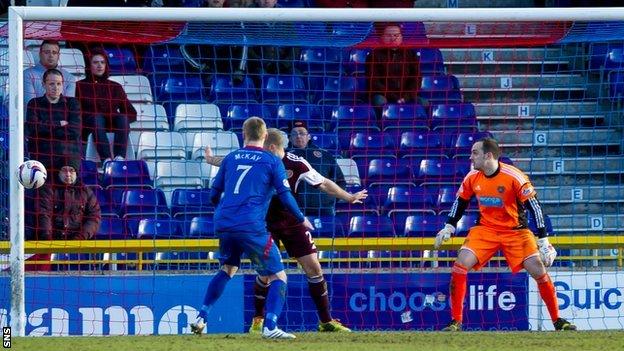 John Hughes felt Inverness just had "one of those days" when the ball would not go in for them against Hearts.

"It's just one of they days," Hughes told BBC Scotland. "Their goalkeeper had a worldy; one or two great saves and it just wouldn't go in for us.

"No complaints about the effort, commitment and style of play."

Caley Thistle were by far the superior side in the first half, with Marley Watkins and Billy McKay seeing efforts hit the crossbar.

"In terms of ball retention we were well on top," said Hughes.

Inverness have won two of their last 10 Scottish Premiership games but have a League Cup final against Aberdeen to look forward to in March.

"It's a little bit frustrating but not too disappointing, it's only frustration," added Hughes. "Right at this moment the team's possibly picking itself.

Inverness have a home Scottish Cup fifth-round replay against Stranraer on Tuesday after the initial match finished 2-2.