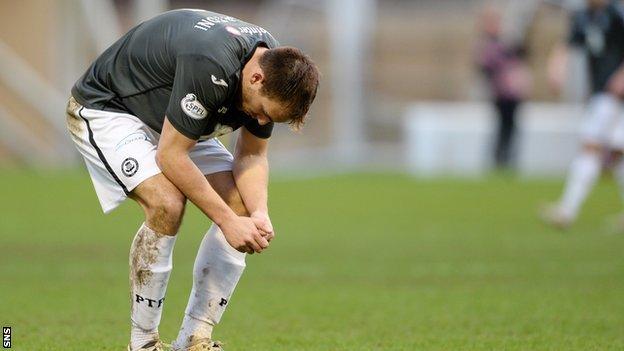 Manager Alan Archibald says his players need to "man up" after yet another Partick Thistle hard luck story.

Having gone in front at Fir Park, the visitors then came back from 2-1 down to lead again, only to lose out 4-3.

"They're not young boys, they are experienced enough now," said Archibald.

If you score three goals at Fir Park it should be enough to win the game.

A win would have lifted the Jags into ninth place in the Premiership but they remain in the relegation play-off spot, while basement side Hearts reduced the gap to 16 points.

An exasperated Archibald continued: "The young, naive thing that we've been tagged with... We tell them all the time that they've got jobs to do. We knew they'd throw everything at us.

"If you score three goals at Fir Park it should be enough to win the game. Not many teams have come here and done that this season.

"I thought we were going to get at least a point and I thought we deserved it for the way we played in the second half.

"But it's been our Achilles heel all season and it's come back to haunt us.

"It's very frustrating. I thought we dealt with Motherwell all day and the back four did well against them until the last five minutes.

"And we had to make late changes because of a couple of knocks and that has affected us."

One of the players departing in the closing stages was Kallum Higginbotham, who was inspirational for Thistle, having set up the first goal before converting a penalty and firing in a terrific shot to make it 3-2.

"He was very good," said Archibald of his midfielder. "It's against his old team and sometimes you get that. It's either a hit or a miss and he was a hit today.

"He took the game by the scruff of the neck in the second half and had a real go at them.

"I thought he was outstanding."