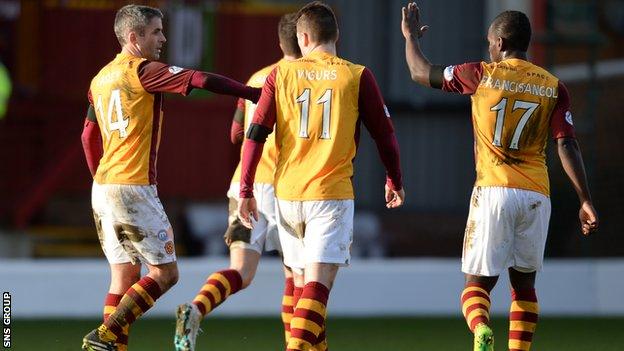 Motherwell boss Stuart McCall praised the resilience of his depleted squad after a late comeback secured a 4-3 win over Partick Thistle at Fir Park.

And he hopes skipper Keith Lasley is not added to his list of casualties.

The midfielder, who was on target in the first-half, picked up an early knee injury but played on for 90 minutes.

"He took a real sore one early on and might be out for a while, it's his medial ligament," said McCall. "For him to carry on showed great guts."

Lasley was not the only player running on empty at the end of an enthralling match played on a soggy pitch, which the visitors led twice at 1-0 and 3-2.

"It was hard fought and we had a lot of heavy legs out there late on," added McCall. "A lot of people dug deep.

It certainly wasn't our best performance but it was gritty

"I thought we were rusty at times but both sides showed great character in a game that was end-to-end. There wasn't great quality but there was plenty of excitement."

Motherwell appeared to be in control when Lionel Ainsworth added to Lasley's deflected strike to put McCall's team in front early in the second half.

But the winger conceded a penalty, converted by Kallum Higginbotham, and the Jags' midfielder soon added a superb second goal.

"It was silly penalty to give away and Lionel knows that," added McCall. "It gave them a boost and with 10 minutes to go you're thinking maybe a point is the most we can get from this.

"But I should never doubt the lads in the dressing room because the character is terrific and they kept going.

"It certainly wasn't our best performance but it was gritty. We kept at them."

"We had five kids on the bench and it was really heavy going out there. Sometimes you want to use the bench and bring some freshness on but we only really had Henri (Anier) that could do that for us."

The win keeps Motherwell one point behind second-place Aberdeen with a game in hand but McCall was playing down their chances of repeating last season's runners-up finish.

"I'm not being negative but I think Aberdeen have shown what a good side they are in the last few weeks," he said.

"My first reaction is to have a look at Dundee United and Inverness, St Johnstone and Hibs, the teams below us.

"Top six was the realistic aim at the start of the season but now we've put ourselves in a position to be looking to finish in a European place. That could be fourth, depending on the cup, but certainly third.

"So we'll be demanding everything from the lads in the last third of the season."