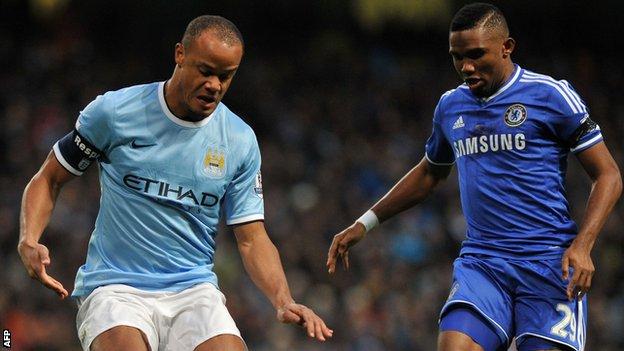 Manuel Pellegrini's men have lost twice to Chelsea in the Premier League this season, most recently at Etihad Stadium less than a fortnight ago.

However, goals from Stevan Jovetic and Samir Nasri helped the hosts into the quarter-finals of the FA Cup.

"I think Chelsea will be very disappointed with their performance. In the end it was a comfortable win for Man City, who were much, much better. They were solid and denied Chelsea time and space throughout. You have to say, City thoroughly deserved their victory."

"We wanted revenge today," Kompany told ITV Sport. "It's a big win against a strong team. We love the FA Cup."

City trail leaders Chelsea by three points in the Premier League, albeit with a game in hand, but they dominated the Blues at Etihad Stadium.

Jovetic also hit the bar for the hosts, who registered six shots on target compared to Chelsea's none.

"From the word go we were hard in the challenge, we were spot-on creating a lot of chances and we didn't give any away," added Kompany.

"Twelve days ago we had a really bad game, we gave them a lot of chances but we created a lot as well. Today we just adapted, they played the same and it was comfortable for us.

"I think this was a great game for the competition and we're really happy with the result."