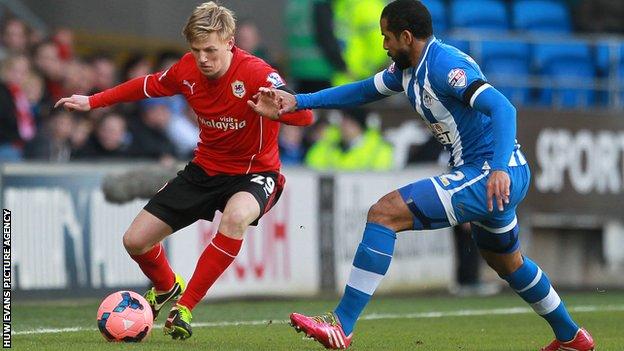 Cardiff were beaten 2-1 at home by holders Wigan Athletic of the Championship in the FA Cup fifth round.

Daehli, 18, was disappointed with the defeat but says Cardiff must now concentrate on league safety.

"You want to win every game that you play but now we just have to focus on the league and do well there," he said.

"We just have to bounce back in the league and focus on staying up. That's what we can do now.

I want to start every game but I know that I'm young and I'm still developing and there are still parts of my game that I need to improve on.

"We can work on stuff this week and just have to kick on and do well. I think everyone knows what needs to be done.

"We just need the belief and to take our chances and we'll be fine."

Cardiff are second from bottom in the Premier League table and host Hull City on Saturday.

Ole Gunnar Solskjaer's side are two points from safety and five points behind 13th-placed Hull with Daehli admitting they need to win on Saturday.

"You can look at the table and you can see that it's very tight," Daehli added.

"You need to win that game. We know what we need to do."

Norway international Daehli, who joined from Molde in January, made his first start for Cardiff in the Wigan defeat.

The former Manchester United reserve player said Cardiff did not take their chances against Uwe Rosler's side but the midfielder was pleased with his own performance.

"I thought I did ok. I got to play in the hole, my favourite position," Daehli said.

"I want to start every game but I know that I'm young and I'm still developing and there are still parts of my game I need to improve on.

"My focus is that I want to play and I want to show that I can play every time I play.

"You just need to have the right focus and the right mentality."