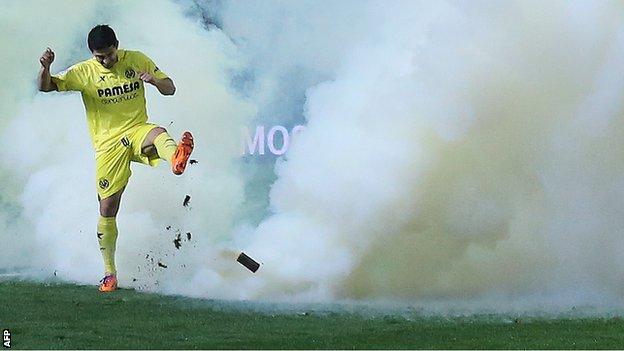 Villarreal's home game with Celta Vigo in Spain's La Liga was suspended in the 88th minute after a smoke bomb was thrown on to the pitch.

Celta Vigo were leading 1-0 at El Madrigal when a canister, which was billowing smoke, was thrown.

Referee David Fernandez stopped play and led both sets of players off the pitch as fans, many covering their eyes, streamed out of the ground.

Play resumed around 20 minutes later and Celta went on to win 2-0.

"On behalf of everyone at Villarreal, I condemn what has happened," said club president Fernando Roig.

"I think it is someone not connected with Villarreal, an individual who has committed an act of vandalism - someone who has thrown it from the staircase and immediately run out of the stadium.

"The police are trying to establish who this person is. I hope they are able to identify the person and that the full force of the law falls upon them.

"It is a similar device to those used by the police to disperse crowds."

It is the second incident involving items thrown on to a football pitch in Spain this week.

Atletico Madrid were fined £492 after an incident on Tuesday when visiting Real Madrid forward Cristiano Ronaldo was struck on the head with a cigarette lighter.

On Saturday, a public announcer at Villarreal asked fans to evacuate the ground after the canister was thrown.

Players asked for water as the smoke apparently irritated their eyes.

The object was thrown on the pitch shortly after Chile midfielder Fabian Orellana 83rd-minute goal for the visitors.

When play resumed, Celta extended their lead through Nolito in front of a half-empty stadium.